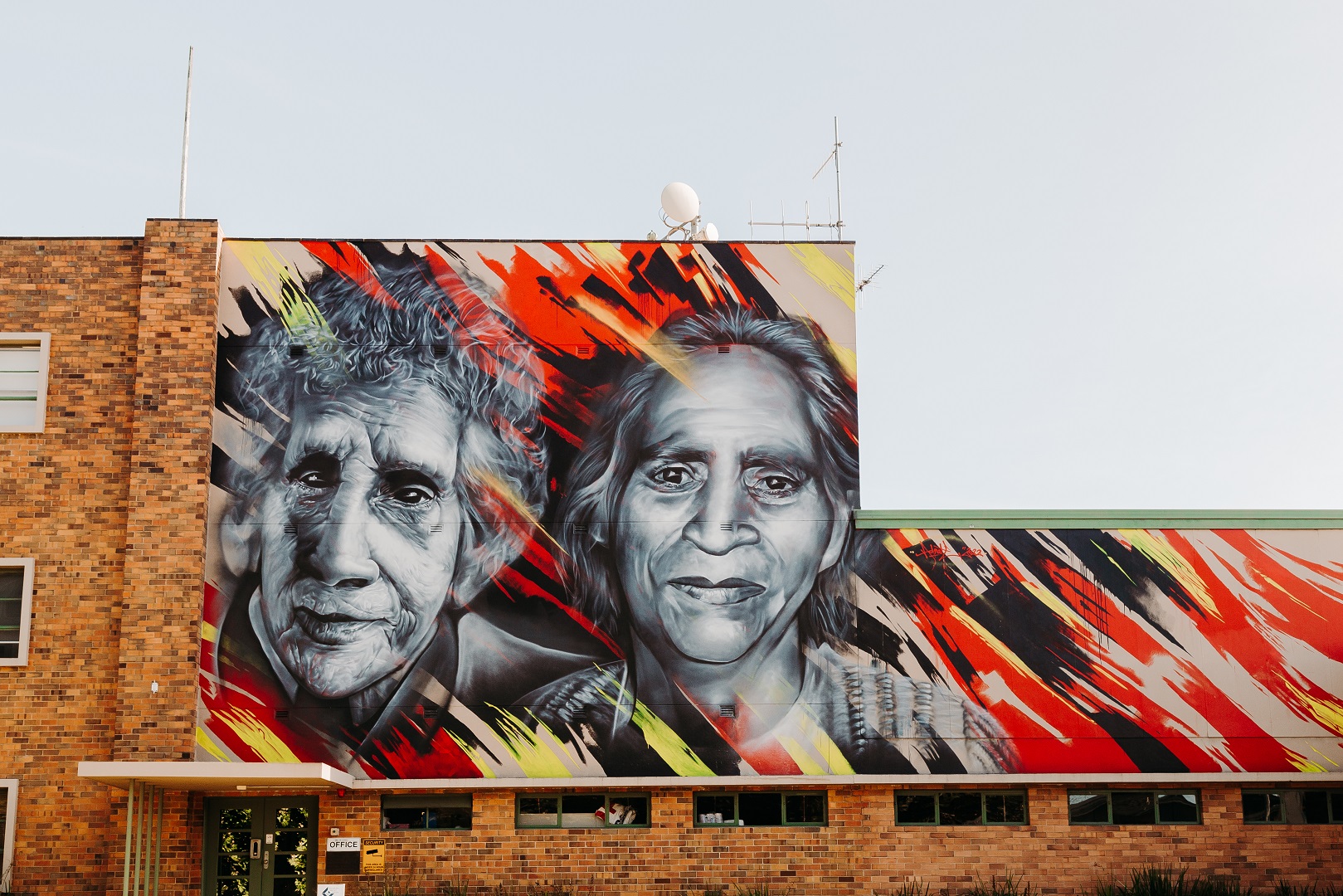 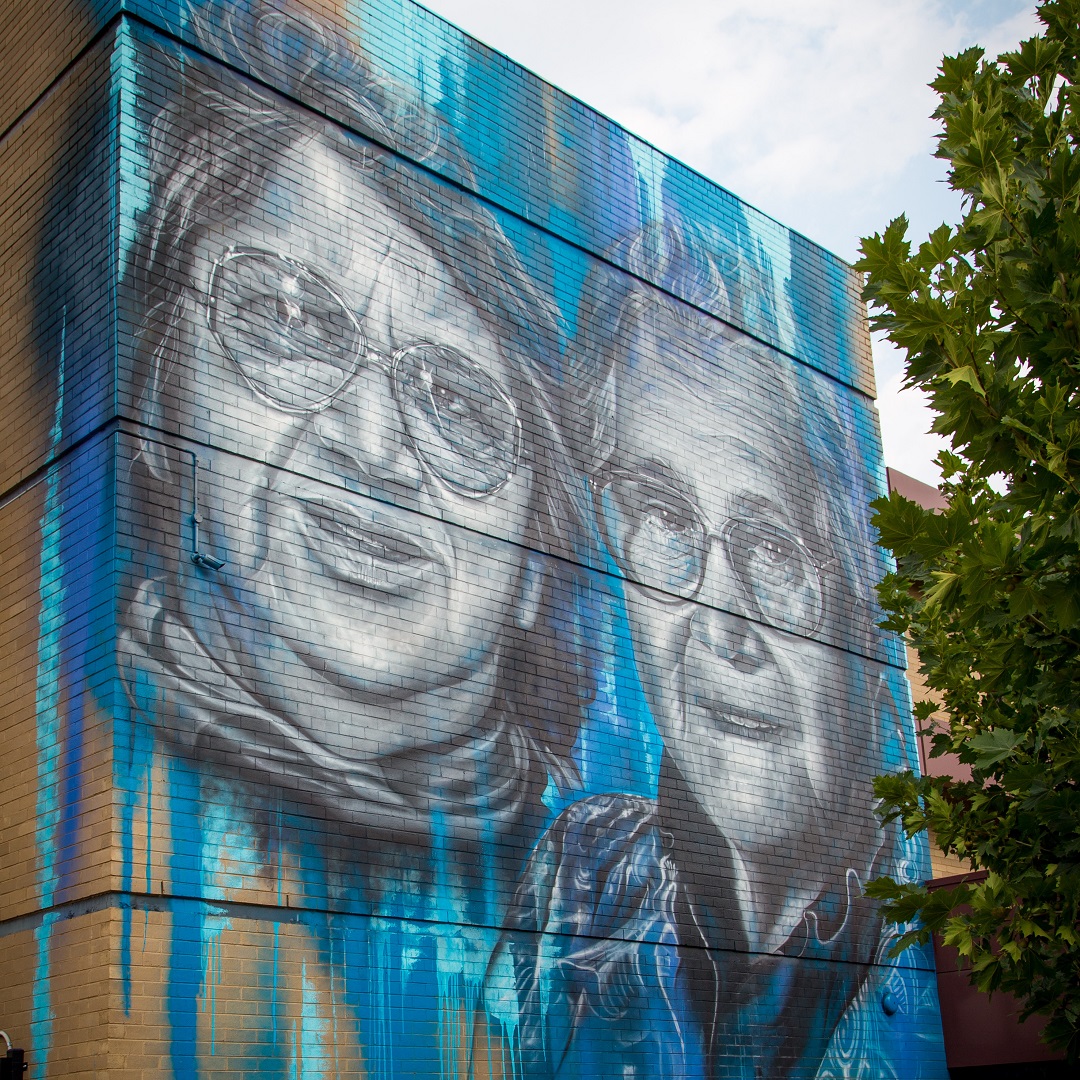 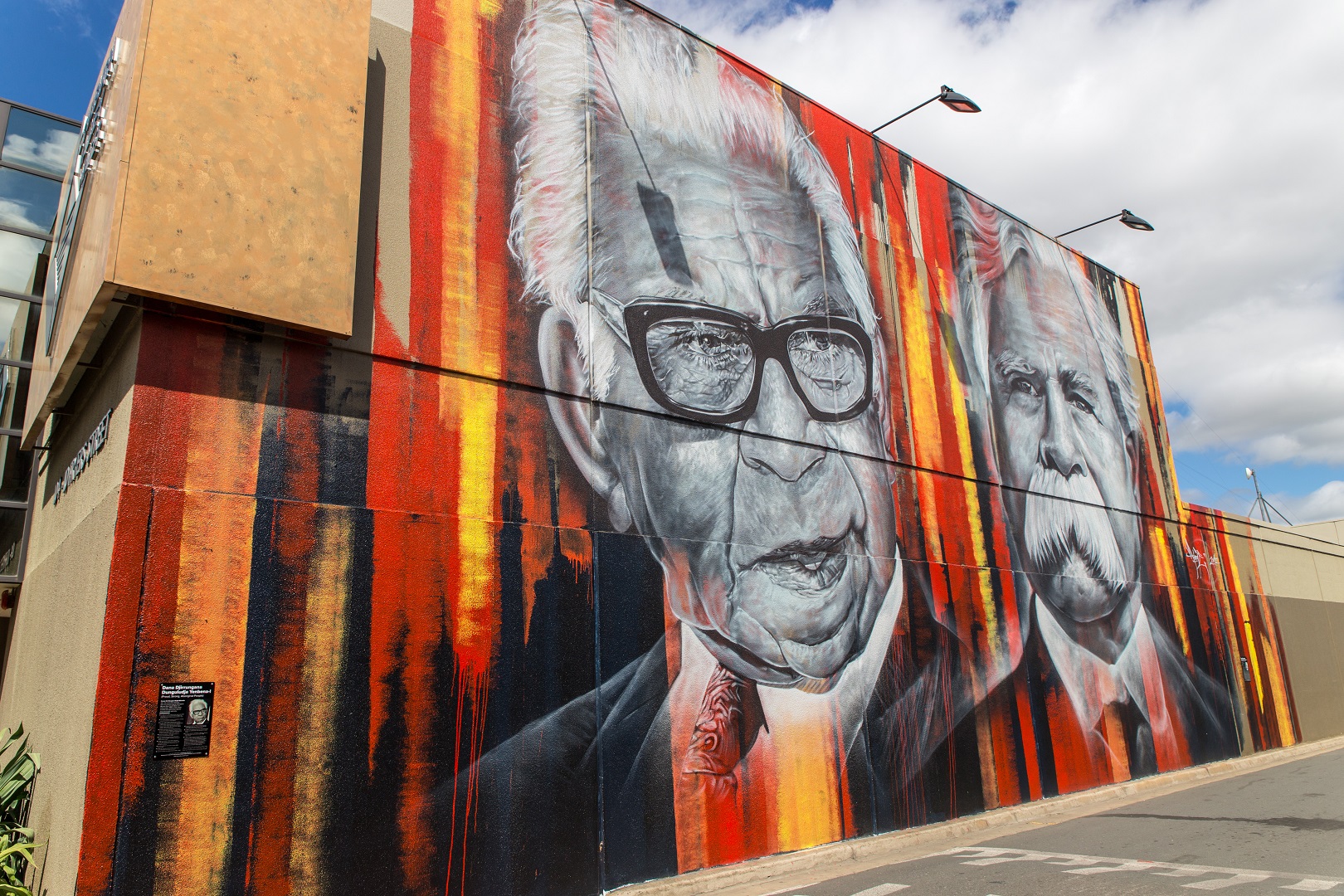 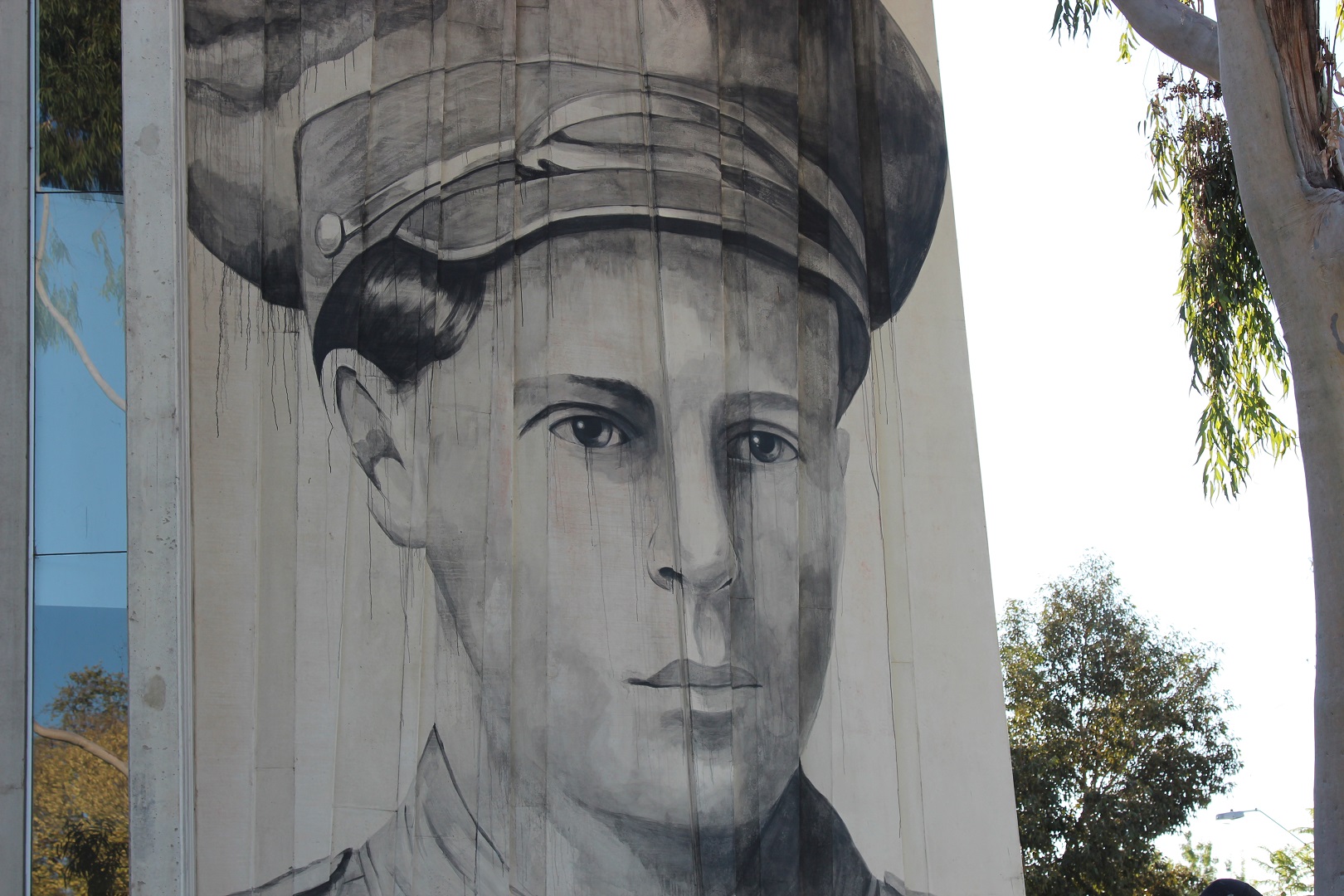 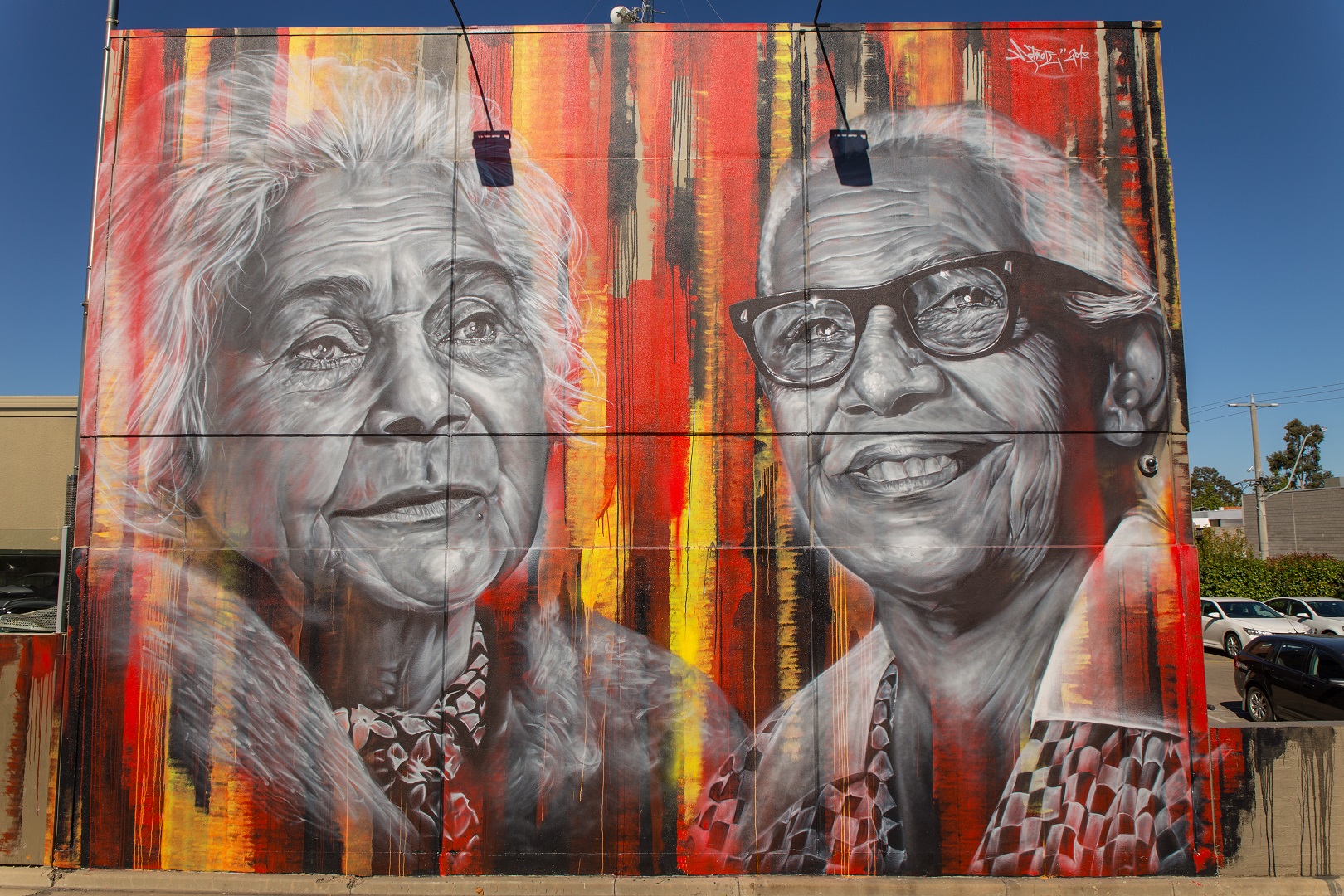 The Aboriginal Street Art Project has unveiled a new sweeping mural in the regional city of Shepparton.

Nothing gives a city its character quite like street art. A vital part of cultural communication, street art (be that a mural or graffiti) can pop up on a telegraph pole, alongside train tracks and adorn once-government issue grey buildings.  While some of it is fleeting, the vast, visually arresting murals from the Aboriginal Art Street Project are anything but.

Just this month, the project’s newest mural has been unveiled along the length of the Goulburn Valley Water (GVW) building on Welsford Street in Shepparton. The mammoth new piece pays homage to two highly regarded Yorta Yorta elders, the late Aunty Violet Harrison and late Aunty Mary James. Both women played significant roles in their local Aboriginal communities across their lifetimes; such as co-founding both the Rumbalara Cooperative and Bangerang Cultural Centre, among other important community-based work.

The mural comes from the hand of one of street art’s most influential big wall painters, Matt Adnate, which marks his fourth mural for the project. Adnate is well regarded in the local Aboriginal community for his culturally-sensitive arts practice and his incredible craftsmanship. His other murals can be found at GVW walls on Fryers Street and Stewart Street and the Department of Health and Human Services wall on Welsford Street.

An important part of a city’s expression, street art not only transforms the aesthetic of a city, it also leaves an imprint of the zeitgeist. Commissioned and delivered by Greater Shepparton City Council, in collaboration with Yorta Yorta Nation Aboriginal Corporation, the Aboriginal Street Art Project is making visible the vibrant cultural heritage local to Shepparton – an important gesture of social activism.

The project,  named by locals ‘Dana Djirrungana Dunguludja Yenbena-l’, means ‘Proud, Strong Aboriginal People’ in Yorta Yorta language, is a provoking, inspiring celebration and recognition of local Aboriginal history. Take a wander through the region; there are five murals to be found.

THE DETAILS
WHAT: New mural for the Aboriginal Street Art Project
WHERE: Welsford Street, Shepparton
WHEN: Open at all times
MORE INFO: Visit Shepparton