Bouncing back: four chefs reflect on the lockdown and their journey towards reopening

With the ‘Ring of Steel’ dismantled, the 25km rule dropped, and our favourite destinations open for business we’re ready to head for the hills, beach, or valleys to celebrate our newfound freedom. There is a palpable energy in the air both in the city with people looking forward to a road trip, and in the regions, with kitchen crews preparing to welcome back long separated city guests.

We spoke to some of our top chef/owners in regions around the state about their COVID19 lockdown, what they did to survive, and what they plan to serve up to us when we arrive to dine with them. 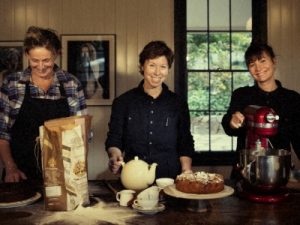 Brigitte Hafner baked us our daily tarts and made us our daily vitello tonnato when she and Jamie Broadway ran Gertrude Street Enoteca in Fitzroy. It closed forever over winter, preceded, thankfully, by the opening of the bucolic dream that is Tedesca Osteria. Perched on the spine of Main Ridge on the Mornington Peninsula, overlooking flowing creeks, stringybark forest and vineyards beyond, Tedesca Osteria is reminiscent of those classic European Michelin star restaurants with set menu dining.

When we spoke, Brigitte had just finished her second service since reopening after lockdown. “We were a bit anxious,” says Brigitte. ‘But what happened during lockdown was that we became a team. We only opened in March and did not have time, really to prepare,” she says.

With lockdown, she and her team, including Broadway, went to work preparing food boxes each week to keep Tedesca afloat. They contained comfort food, including bread and baked goods,  her German mother’s strudel and Eccles cakes with cheddar cheese. “We were able to keep most of our team, including our visa holders, together except one, who got a job as a nurse,” says Brigitte cheerily. “We all worked chopping wood, gardening, preparing the food. Skills that we learned and shared. I now have a great orchard planted with amazing citrus and nut trees.” Being in a beautiful part of the world made it easier for Brigitte and her crew, with daily walks along deserted country lanes and long strolls along the beaches of Westernport. “We were also able to have a smokehouse built in which we will smoke our smallgoods when we start getting our whole pigs in from a local farmer.”

This week she has been serving dolmades made with her own preserved vine leaves, mud crab with fresh pasta, tarragon, and garden peas. There is also Great Ocean Road Duck with chickpeas, spinach, and west Indian limes and a Paris-brest to finish. “We learned so much over lockdown about being a team,” says Brigitte. “Now it’s time to put those skills to work.” 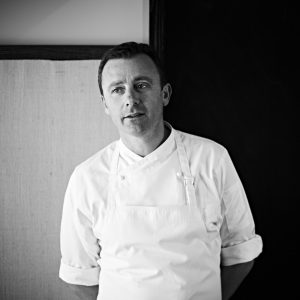 “We are here, and we are open,” says Dan Hunter of Brae at Birregurra. The internationally acclaimed chef has worked around the world and has watched as the pandemic raged through the places in Europe where he worked in his earlier years. “The international imagery of hospitals in Italy and Spain was devastating,” says Dan. “There are worse places being in lockdown than here,” he says of the masterfully converted farm cottage perched on a farmlet, surrounded by acres of orchard and kitchen garden.

“In early April, I looked around and saw a vegetable garden full of late summer produce, and it gave us a feeling of safety. We were comforted being out of the city on a rural property surrounded by produce that could feed the family,” says Dan. “We have the skills to grow the vegetables to feed us.” Dan and his team harvested fruit and vegetables from the kitchen garden and sold them to the local community. This connection with the local people continued with a series of international-themed dinners that took residents to Japan, Korea, Hong Kong and beyond. “We also made picnic boxes with our bread and terrines so people could take themselves away,” says Dan. Dan and his family were able to escape to the seaside area of Skenes Creek near Apollo Bay. “Spending time with the family was so important,” says Dan.

After good spring rains, the dams are full, and the surrounding countryside is verdant with lush pasture that Dan describes as ‘money paddocks’ for the local graziers; Dan looks to his gardens for inspiration for his late spring menu: asparagus, peas, broad beans, lettuce and radicchio to cook dishes like “rainbow trout and broad beans from this season and last, anise myrtle, roe and citrus, radicchio brushed with treacle and black garlic.” With customers back, Dan and his wife Julianne wrestle customer expectations and government COVID capacity rules. “You know what gave me great joy this spring?” asks Dan rhetorically. “The black swans who came to stay on the dam and the evening chorus of frogs. Simple things.”

Head here to take a look at Brae. 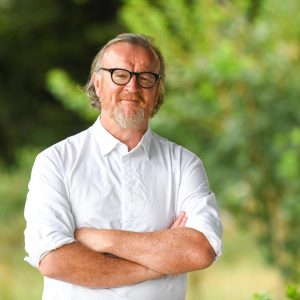 “From here in Beechworth, I knew just how devastating the lockdown was for the industry,” says Michael Ryan. He speaks from Provenance, based in a solid-granite, former bank in the heart of historic Beechworth, where Michael cooks his unique Japanese influenced style of cuisine.

“When it first started, it was the unknown. And that is terrifying,” he says. Michael and his team suffered the triple whammy, first the fires over summer, then lockdown one, a brief awakening, then lockdown two. “In the first lockdown I tapped the bounty of the season and made sugo, chestnut jam and lime marmalade and some amazing grenadine,” says Michael. “I pulped 60kg of pomegranates for that grenadine. Not something I need to do again in a hurry.” It was a mild winter in the North East, and Michael spent hours on his pushbike, walking the dog around Lake Samball and time with his wife and daughter. “The biggest decision I had to make every day was what to make for dinner,” he says with a laugh.

Michael also received funding to explore making sake and delved into the arcane art of making amaro, the bitter Italian style digestive. He has extracted over 90 different botanicals. He will soon get his licence so he can buy alcohol and make, he hopes, three different styles of amaro early next year. “But now it is so green, so lush,” says Michael. “The days are long and warm and the nights cool. His garden is amok with shiso, the fragrant Japanese herb almost becoming a weed. He salts it down for six months, ready for the autumn menu.” He is currently serving a set menu of a four-course meal made of 18 small dishes. He is particularly proud of his lup cheong pork sausages he made in the first lockdown and potato chips cooked in beef tallow dusted with a little seaweed salt. He also takes great pride in a dish of cauliflower slow-cooked in lots of butter served with white fish floss and coloured pink with beetroot juice and served with cherry tomatoes marinated in sweet dashi. Off the grill comes flat iron steak, served with miso butter and braised onions. “Delightful with a local Beechworth Gamay,” he adds.

Now he is looking forward to the berry and cherry season. “Cherries for the extracts for the amaro,” says Michael. “And with the raspberries, I will make some old school sable, some yuzu cream, and finish it with some fresh lychees.” He pauses. And says, “You know what, that lockdown will be the long service leave I was never going to get.”

Check here to find out more about Provenance. 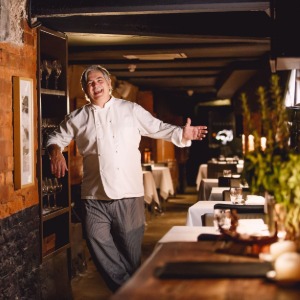 “Mildura went quiet,” says Stefano de Pieri from Stefano’s Cantina at the Grand Hotel, Mildura. “The city went eerily quiet during lockdown. But we were ringed by a hive of activity because the farming never stopped. COVID or no COVID, Australian agriculture never stops. The trucks kept on taking food down to Melbourne,” he says with his usual energy.

Stefano spent a lot of his lockdown walking along the locks of the Murray River. “It is so beautiful, so tranquil, there are so many birds. It all helps me to contemplate where I am in my life. I realised I will be 80 in 15 years! I can not think of that many chefs still behind the stove at my age,” he says. “So I raged against the ‘dimming of the light’ by renovating the dining rooms,” says Stefano with a laugh. He also successfully campaigned to become a Mildura City councilor, hosted the Australian Alternative Varieties Wine Show, made 22 Youtube episodes of a children’s cooking show, and shot a ten-part food television series with SBS. “So, as you can see, I have not been idle,” says Stefano.

He has also been working on his menu, freshening it up, putting on more seafood and vegetable dishes. “What I cook reflects what is grown here as much as possible. So this has been the season for asparagus and artichokes. We have been making our own ricotta, which I use with bullhorn peppers stuffed with smoked eggplant.” Stefano has also got his hands on some locally made ‘nduja, which he is serving with baby calamari. “It is 35°C outside each day,” says Stefano. “We need to serve food that reflects the climate, not just the season.”