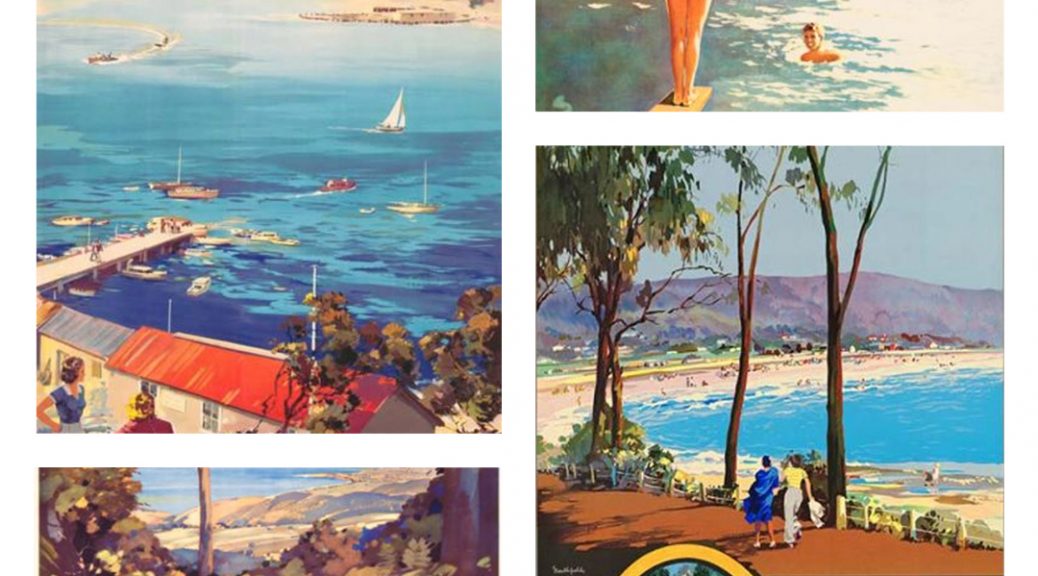 “I instantly recognised him as a seminal figure in Australia’s design history,” Roger says.

No-one captures the most aspirational aspects of our culture in the early 20th century as effectively as Northfield.

As an artist as well as a lecturer, Roger is the director of Melbourne-based consultancy Art Strategies Australia. He believes Northfield’s works have stood the test of time due to their idyllic depictions of Australian life and leisure.

“Northfield depicts Australia as a sun-soaked place of leisure, peace and abundance,” he says.

“I believe many Australians still aspire to these values and readily recognise them in his work, even though superficial aspects of our culture have changed.”

James Northfield is arguably Australia’s best-known graphic designer. Renowned for his vintage posters, his work promoted the Australian travel industry and also appeared in billboard advertisements and posters relating to World Wars I and II.

According to the James Northfield Heritage Trust, Northfield is one of Australia’s most celebrated commercial artists of the 20th century.  He was recognised for his ‘sound draughtsmanship, excellent composition and the remarkable atmosphere of light and colour with which he captured the quality of the Australian landscape’.

“(His posters) were part of a protracted ‘craze’ for poster art that gripped the western world between the 1880s and the 1940s,” Roger says.

“The commercial utility of Northfield’s travel and propaganda posters is evidenced by long-standing patronage from a cadre of insightful business leaders in Australia, allowing him to run several lucrative studios over a 40-year career.”

Northfield was also a pioneer in lithography – a process which involved drawing on a stone tablet using a special crayon before processing with acid, covering with coloured ink and then reprinting.

“Although it allowed many reproductions to be made, lithography was very laborious,” Roger says.

“Every colour in the finished poster had to be done on a seperate lithographic stone, printed and dried before the next colour was applied. Eventually the finished design was built up in layers.

“At the time, this was the most advanced process available for commercial artists printing in colour.”

While Northfield’s most successful years were from the 1920s through to the 1950s, it is clear to see how his legacy has lived on, providing such a strong inspiration for artists of the modern age.

“The last decade has seen a huge wave of renewed interest in poster design from the height of the ‘Art Deco’ period during the interwar years and many graphic artists today are producing designs in Northfield’s style on the back of this wave,” Roger says.

Northfield pioneered the idea that ‘modern’ design styles could be used to portray Australia as a tourist destination equal to European and American counterparts. This led to ever more confident assertions of Australia’s uniqueness as the century progressed, culminating in the multi-million dollar tourism campaigns of today.

One Hour Out is currently selling James Northfield prints through its online Market. To make your purchase, click here.