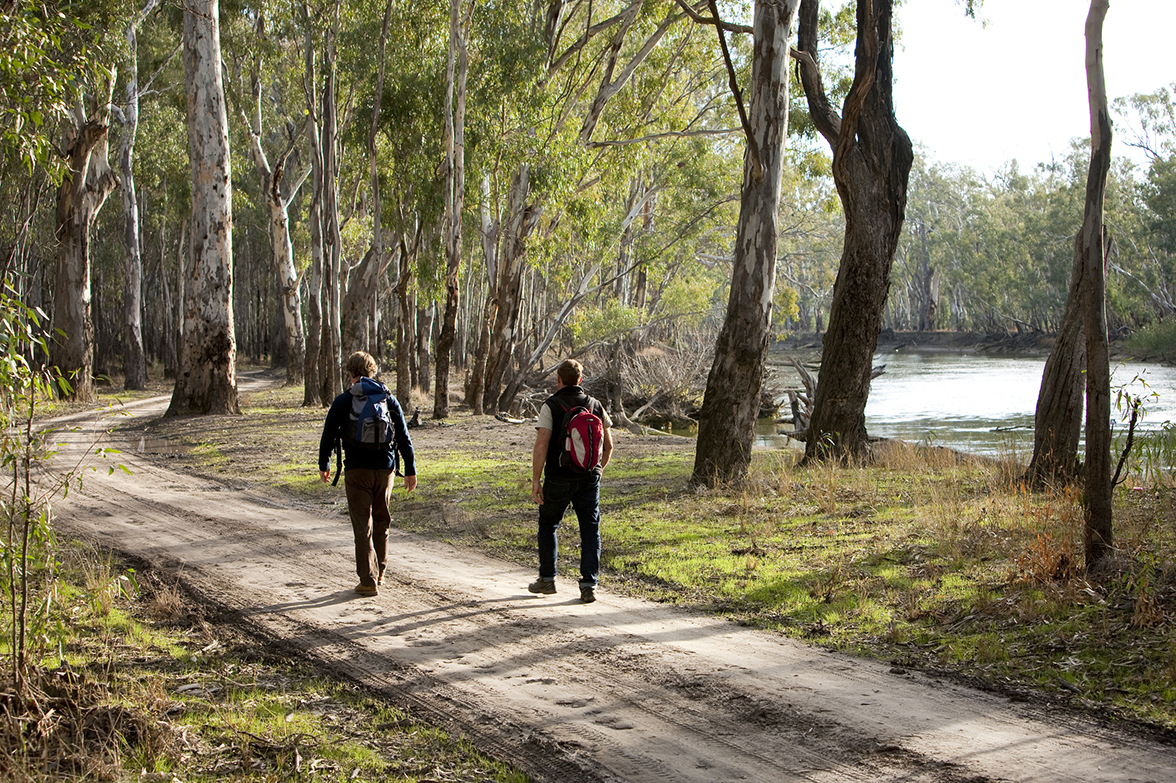 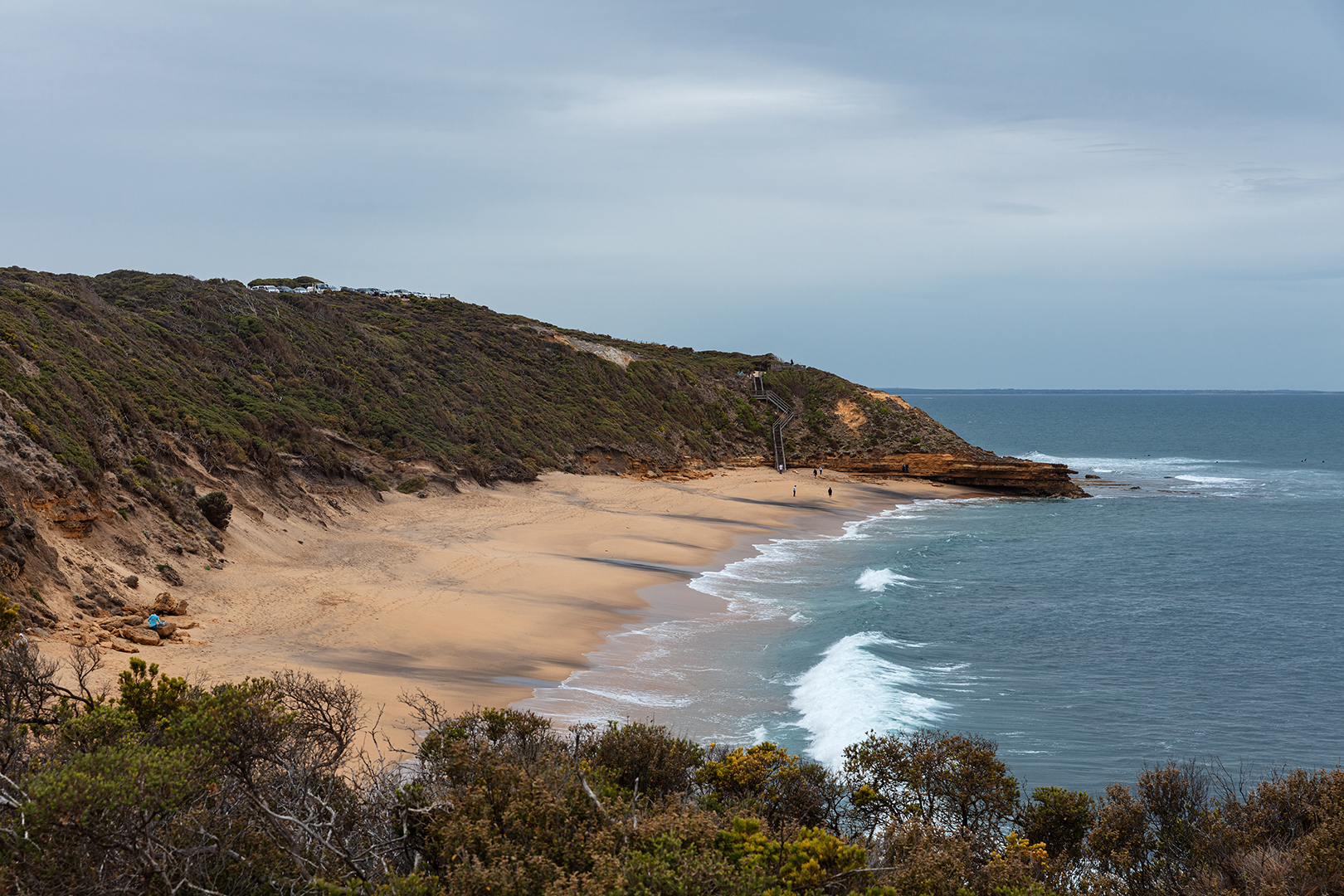 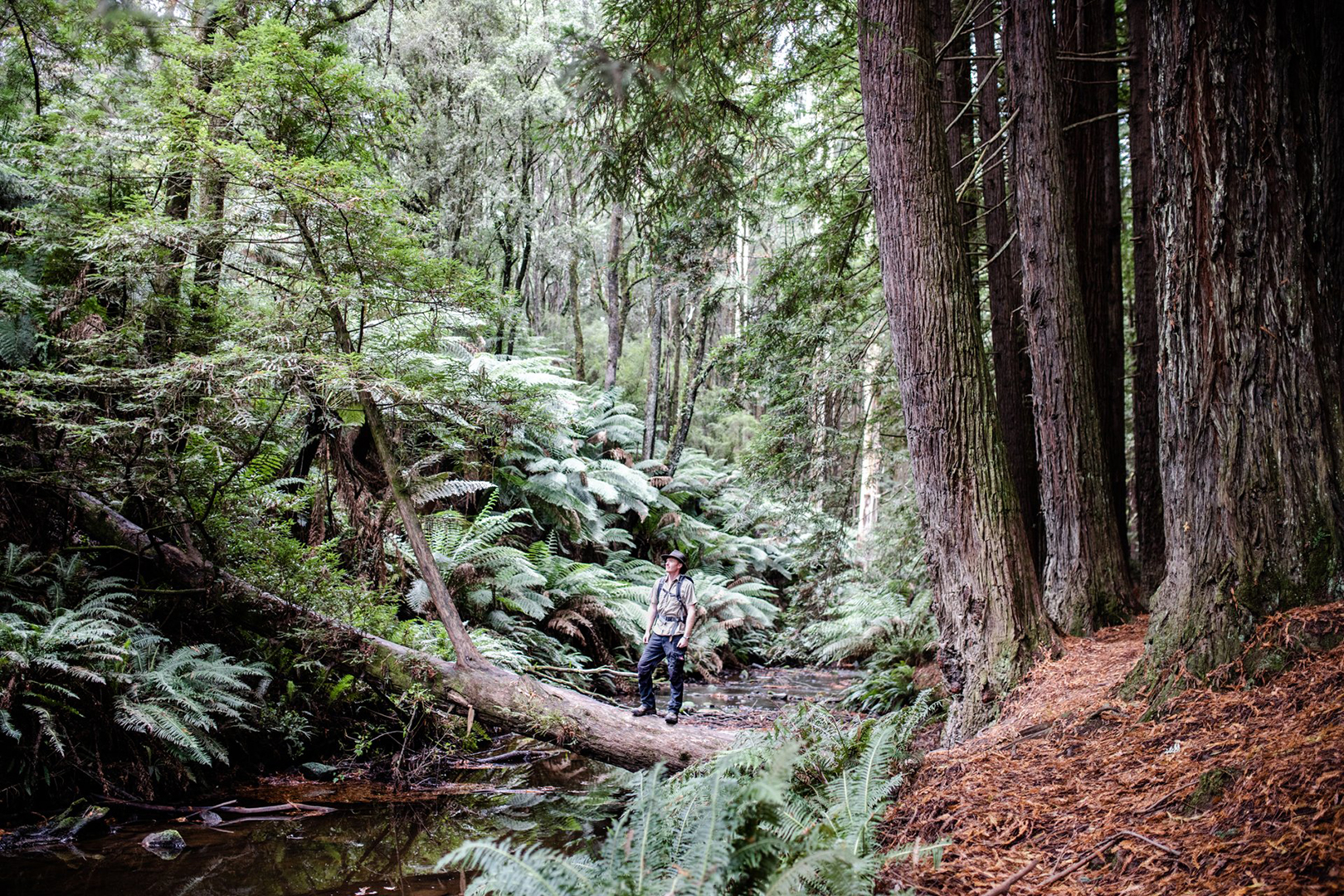 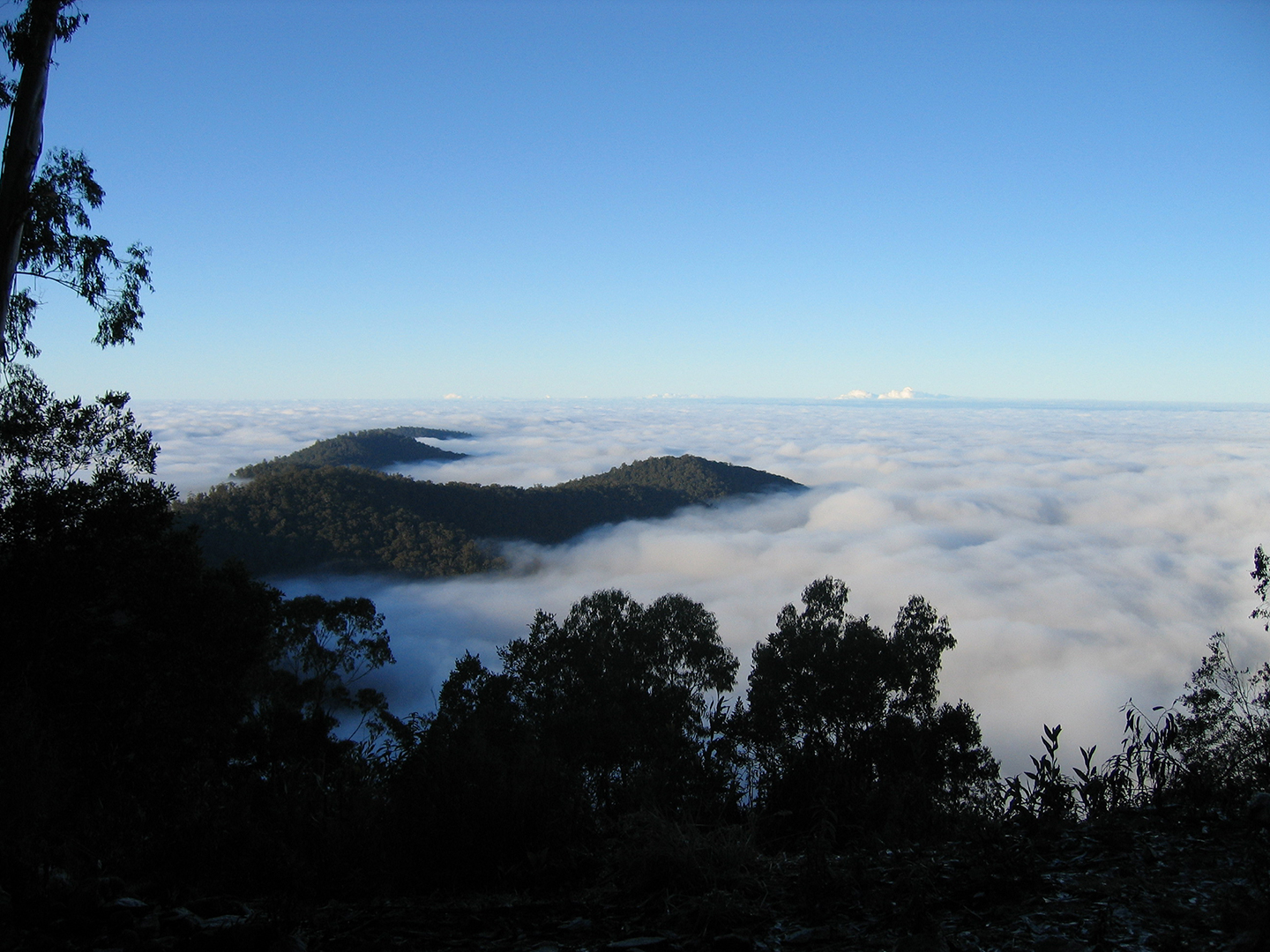 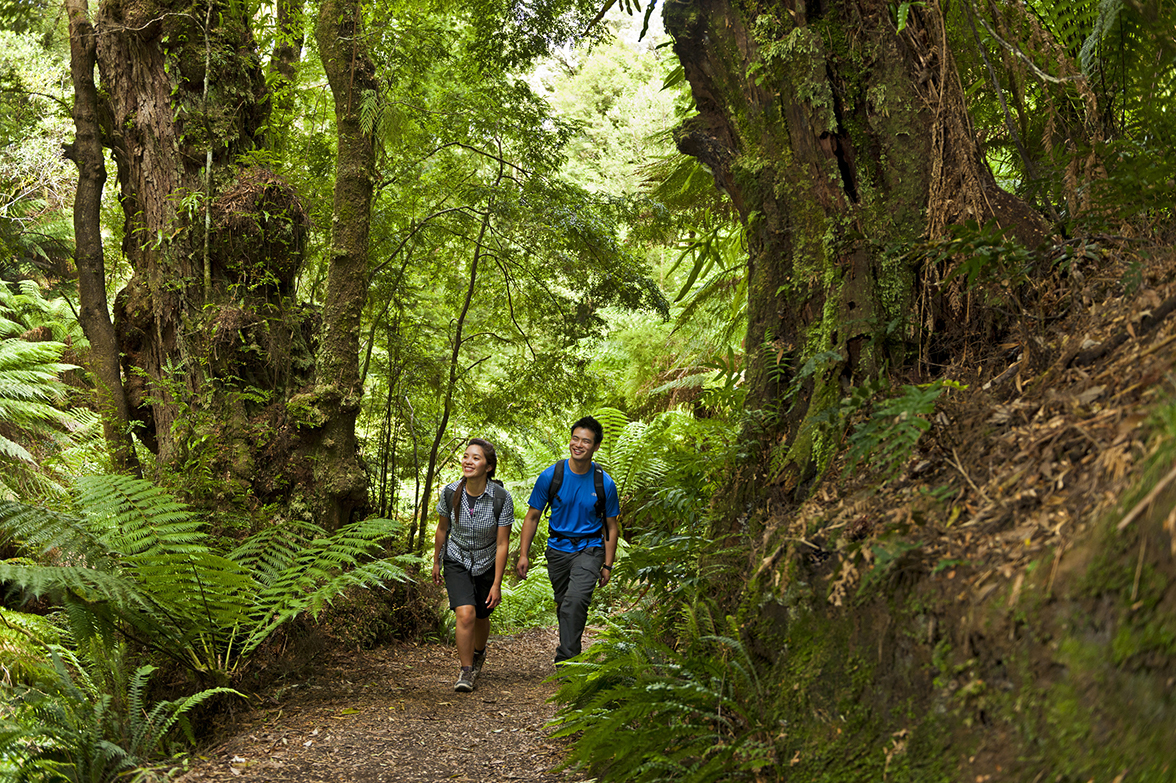 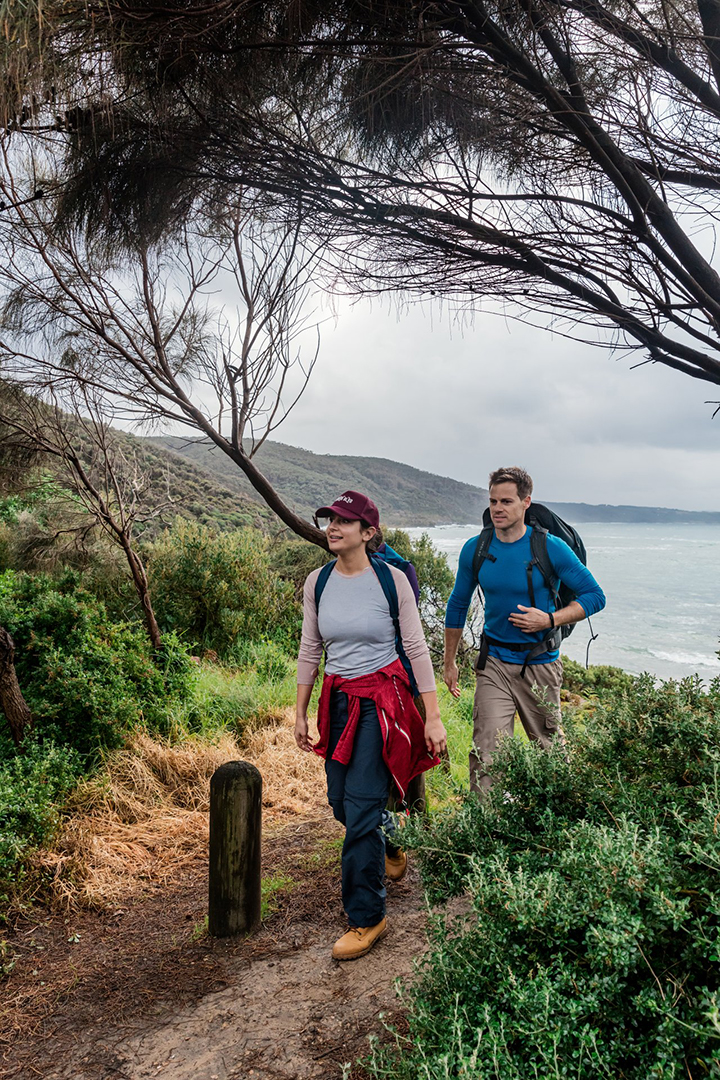 There is something about the primal beauty of mature trees that feeds our body, our brain and our soul. The sun filtering through the canopy, the cloak-like protection from the weather outside, the fragrance from the living leaves, and the earthy aroma from those dead and decaying into the soil. Walking in nature is hard-wired within us.

The fresh air cleans our lungs, the vistas ease our eyes and the act of walking itself promotes an overall feeling of wellbeing. There is also the Japanese concept that people are embracing called forest bathing, or shinrin-yoku. This refers to the therapeutic effect the aromatic compounds emitted by the trees are said to have on peoples’ wellbeing.

Whether you’re into forest bathing or not, here are some of our favourite places to reinvigorate your body and soul, with a stroll in Victoria’s native forests.

Here, the mountain ash trees tower above the cool clear waters of Sassafras Creek, their smooth creamy bark shining like columns. The mute-coloured forest erupts with red and blue and swooping and squawking, as a family of Crimson Rosellas fly noisily in shallow arcs. There’s a brilliant flash of sapphire as a little Superb Wren dances about to impress his mate. Somewhere, under the ferns on the hill above, comes the noise of a wagtail, kookaburra, currawong and cockatoo, and then there’s a lyrebird showing off his repertoire of near-perfect impersonations.

Walk quietly along the Sassafras to Monbulk trail and there’s a good chance you’ll experience all this. It’s 12km one way, starting at the Sassafras Hall, and perfect for a half day walk.

If you don’t have time for the entire walk, try a section of it. We would recommend the 4km walk from Sassafras Hal to the 1950s Kalista Tearooms (103 Monbulk Rd) – this is one of many walks in the forest of the Dandenong Ranges, which can range from short to strenuous.

When the weather is wet the well-made tracks at the RJ Hamer Arboretum offer forest bathing amongst dark and mysterious exotic conifer plantations.

After a walk through the forest giants, try pastries and light meals at the highly recommended Prosperina Bakery and Café (361 Mount Dandenong Tourist Rd, Sassafras). For a bowl of warming soup or great dish of roast pork and cabbage try Seasons Restaurant at Cloudehill (89 Olinda-Monbulk Rd, Olinda). The best reference for forest walks in the Dandenong Ranges is https://explorethedandenongs.com.au/

There is a certain tough beauty about the west coast bush. The prevailing winds bring salt-laden breezes from the surf-pounded coast, stunting the banksias and colourful correas, and twisting the trees – sending many on a leeward tilt. Under the canopy of the ironbark trees there is a sense of stillness; their bark is such a deep red that it is almost black.

After rain, the almost invisible moss swells and grows deep green, cloaking these hardy trees with another layer of life. Late winter and spring see the wattle burst into their tiny pom poms of yellow, and below them are the small but intricately beautiful terrestrial orchids.

This is the forested part of the Iron Bark Basin walk, an 8km hike from Bells Beach to Point Addis. Much of the forest is regrowth, the ancient ironbark removed for firewood to feed the jarosite mine – a mineral compound that was mined and used to colour the paint on Victoria’s famous red rattlers trains in the 1920s. This walk weaves through the forest, around groves of grass trees and opens out onto clifftop lookouts, offering breathtaking views of Bass Strait and the ochre-colored cliffs of Point Addis. In summer, bring your towel and bathers as Point Addis beach is popular with families.

For more information, head to https://www.surfcoastwalk.com.au/.

Soon, parts of the forest at Melba Gully will take on autumnal hues of deep red and vermillion. These are the juvenile leaves of the myrtle beech – an ancient forest tree that covered the earth from Papua New Guinea to Antarctica millions of years ago.

Under them are unfurling fronds of tree ferns and a thick mat of deep forest litter. Along the 1.2km Madsen’s Track Nature Trail in the Great Otway National Park you’ll feel like you’ve stepped back millions of years, when Australia was part of the mega continent Gondwanaland.

Many of the species that were around back then still inhabit this damp, dark forest. The raised walkway takes you deep into this forest, interlaced with babbling brooks and the sound of waterfalls in the distance. At night, the forest comes alight with thousands of glow worms dotting the undergrowth and sheltered nooks like natural fairy lights.

This is one of the many walks in the Great Otway National Park, which can be accessed via the Great Ocean Road. Some of the tracks have been closed for winter and early spring for repairs. Visit https://parkweb.vic.gov.au/ before you leave for track and camping information.

With a massive girth and twisted limbs ending in stumpy hollows, the old river red gum is old. Very old. It was most likely a sapling when Shakespeare was writing his sonnets. But then the river red gum forests are ancient; they have been there since the Dreamtime. Ask the Yorta Yorta indigenous people – this is their home.

A vast forest of silver barked eucalypts whose wood is the deep, red-colour like the flesh of people. You get a sense that they are more than alive when you walk amongst them. The big trees hold – in their limbs and inside the nooks and crannies of their trunk – birds, possums, insects, spiders and lichens.

On a warm spring day, the sounds of buzzing bees and flying beetles, all feeding on the nectar in the tree’s flowers, fill the forest with a low-pitched hum.

Some of the best walks can be found at Barmah, about 30 minutes north-west of Echuca. Start at the Dharnya Cultural Centre, where you’ll learn how to identify the numerous canoe and scar trees in the forest as well as how to look for a clay oven – mounds of baked earth where the Yorta Yorta people would have cooked their meals of fish, turtle, mussels and freshwater crayfish.

From here start a series of walks ranging from short to several hours. For coffee nearby try The Forest Door (3 Maloney St, Barmah) or for some more substantial pub grub try the American Hotel in Echuca (239 Hare St, Echuca).

Mist and fog are not uncommon up on the Errinundra Plateau. Moist air rolls in from the coast and gathers around this ancient forest, some 1000m above sea level. Here, ancient mountain plum pines grow amongst giant granite tors – both covered in moss and lichen and creating a world so beautiful yet foreign that it could have been devised by the mind of Tolkein. This is a land of towering old-growth shining gum trees (some 80m tall), of plunging ravines and soft, silent trees fern groves.

There are a series of walks cut into this wild forest that allow you to travel back in time to the Gondwanaland rainforests and later, when the people of the Kurnai Nation walked the ridgelines throughout the seasons.

This is remote and rugged country, accessible only by mountain tracks shared by massive logging trucks. The roads can be impassable after rain. Make sure you bring water, food and protective clothing.

There’s excellent coffee and fresh bakery items at Wild Rye Bakery at Cann River (14a Princes Hwy, Cann River). There is a range of eateries in Orbost, but book in for a sunset dinner of really decent pub grub at The Marlo Hotel, on the banks of the mouth of the Snowy River. (19 Argyle Parade, Marlo)