Where the wildflowers are: with artist and ecologist Georgina Gould-Hardwick 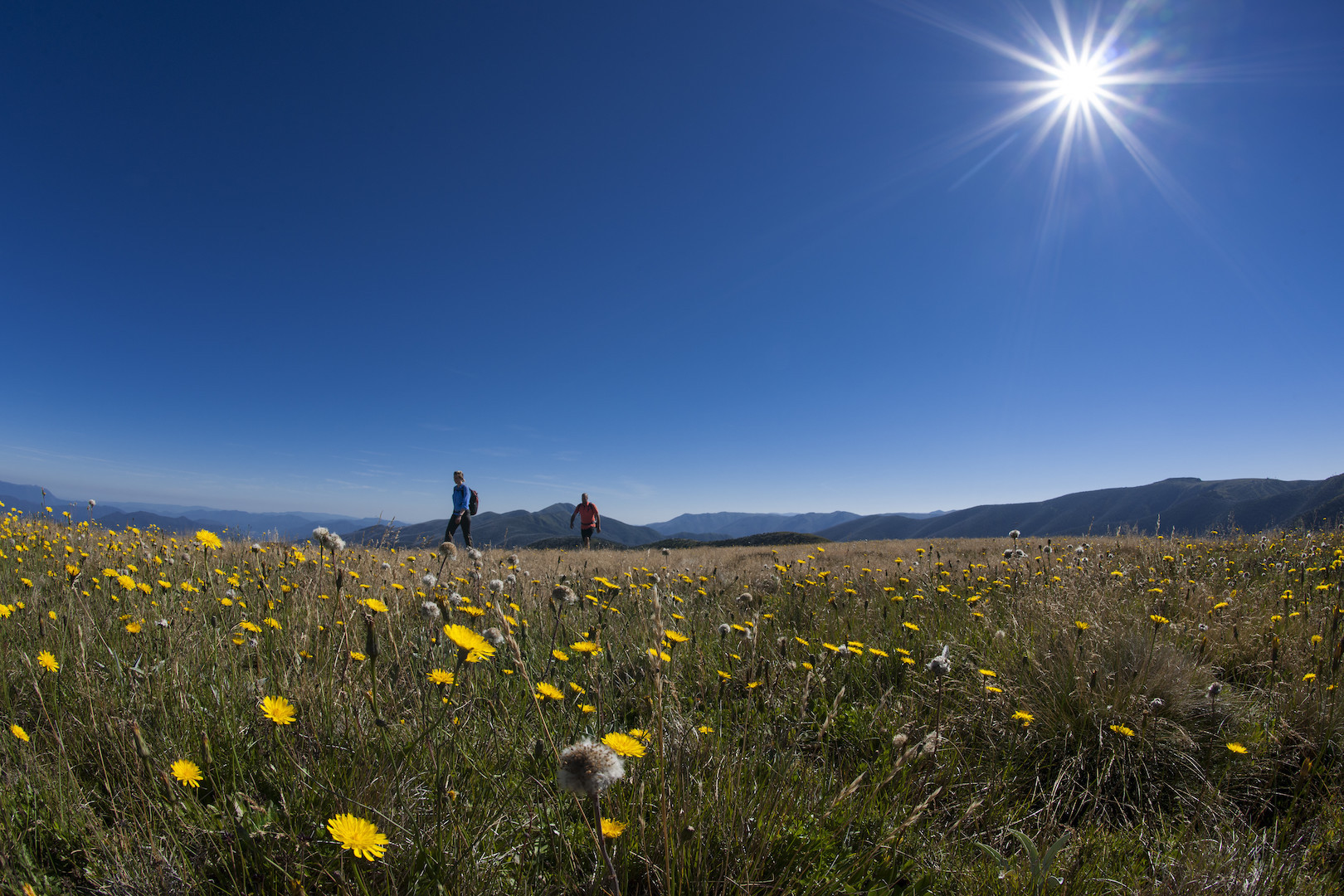 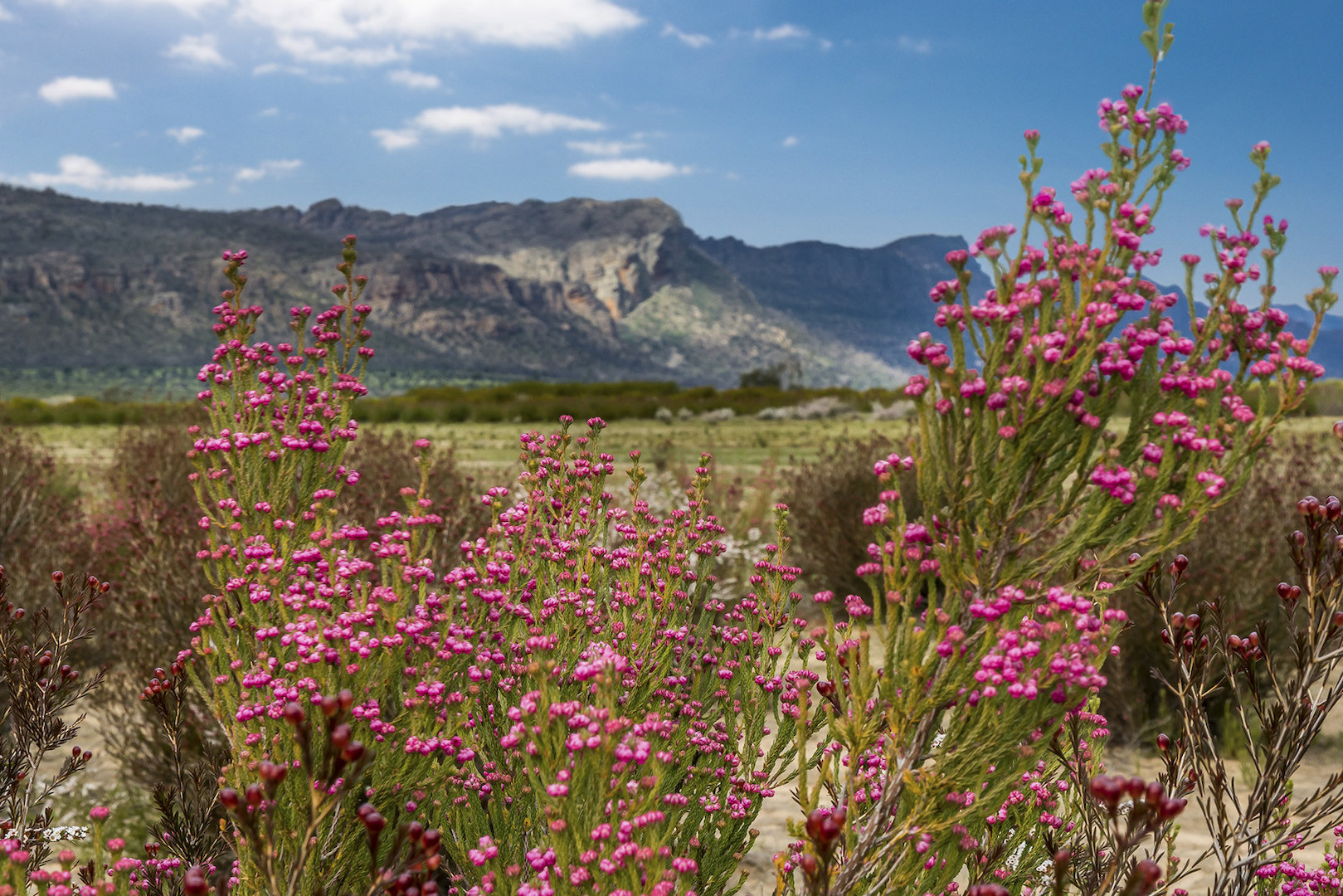 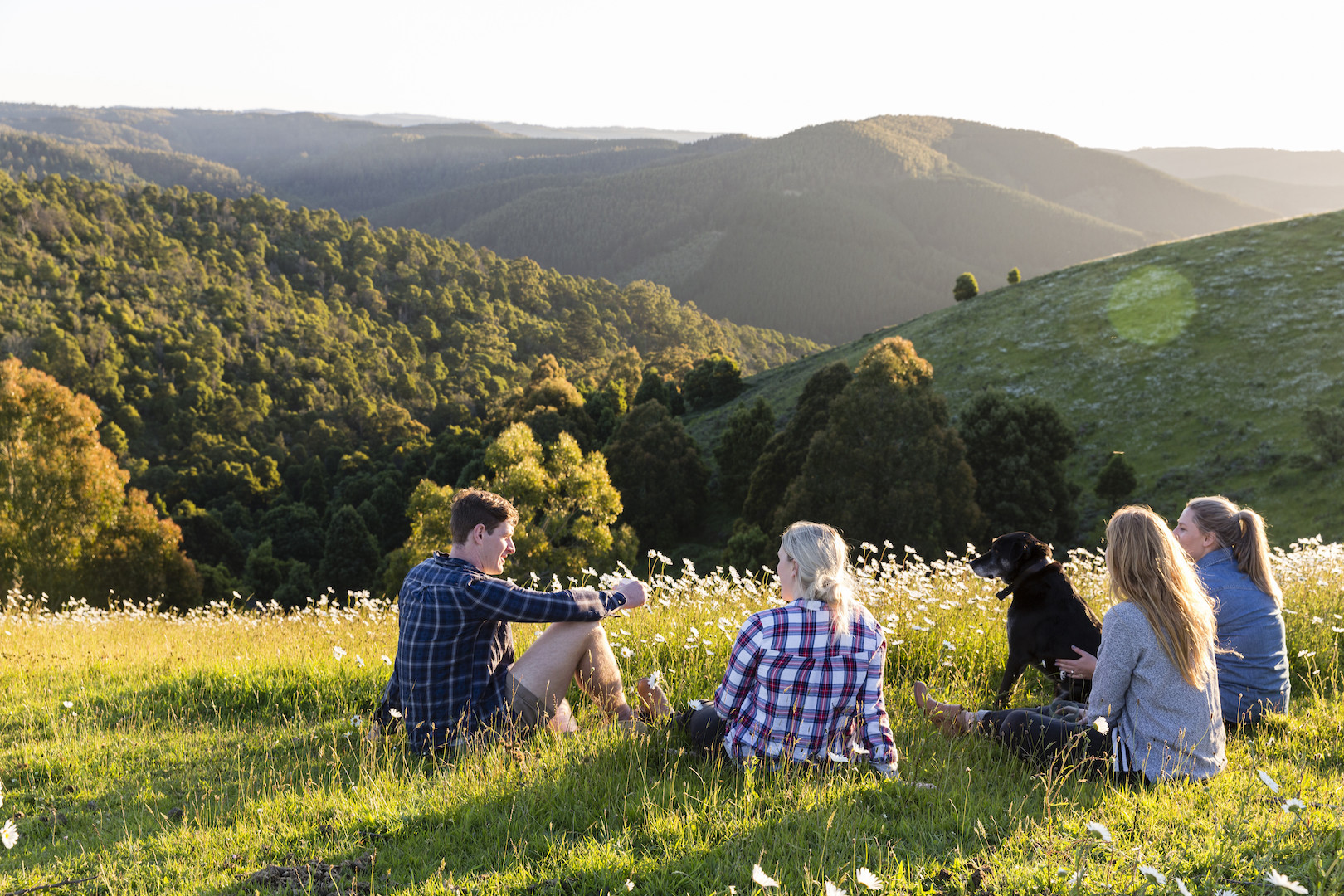 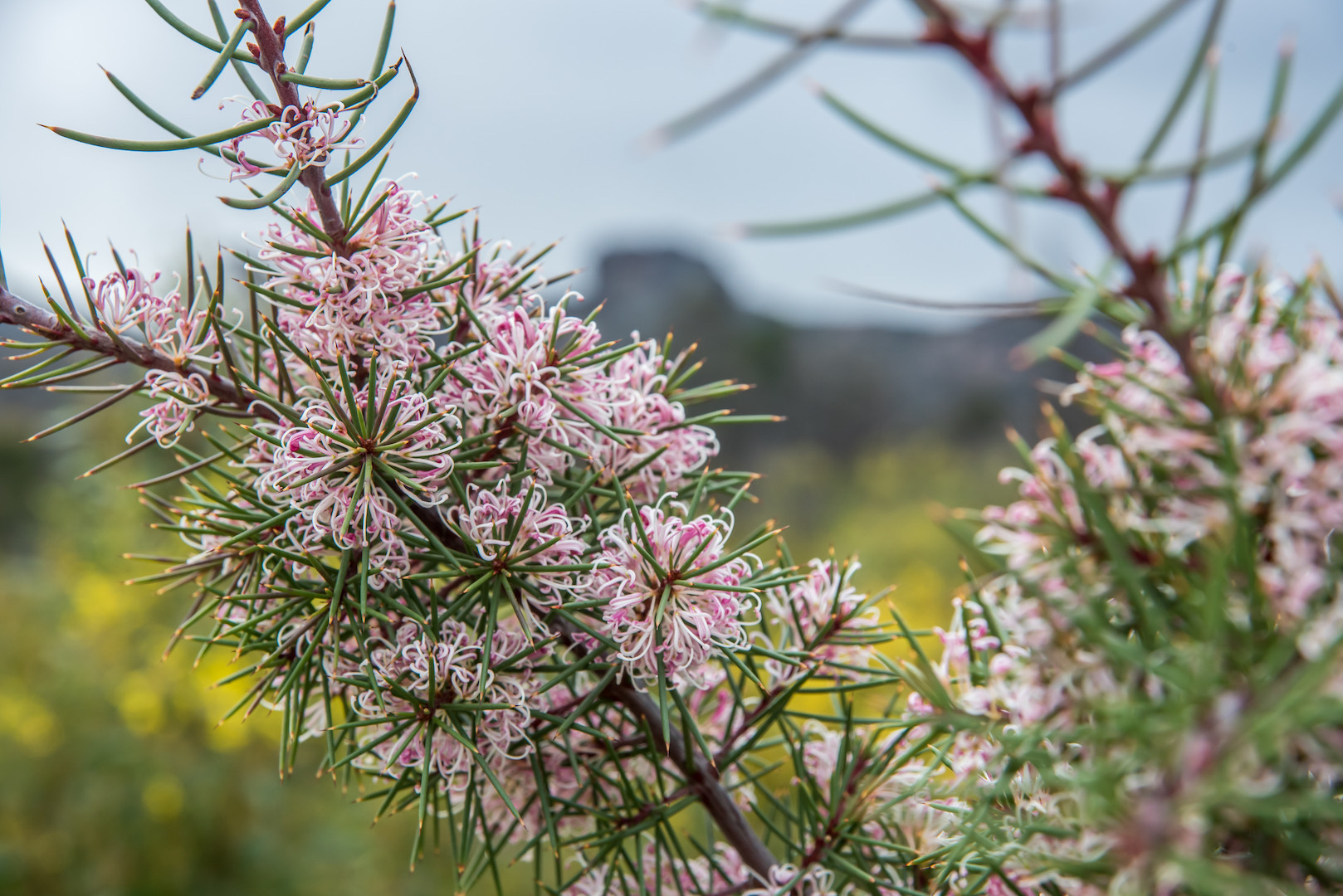 The spring season may be an idyllic time to go wildflower spotting, but these pretty native plants actually flourish in parklands, forests and reserves year-round – all you have to do is look above, around and below.

You’re bound to encounter wildflowers in any natural setting. And while some are endemic, meaning they are native to a certain area, most species can be found all over.

Artist and ecologist Georgina Gould-Hardwick is a graduate of fine arts and environmental science, and her love for ecology, native plants and wildlife inspires most of her art. With Georgina’s help, we have created a list of spots to seek out wildflowers across regional Victoria. 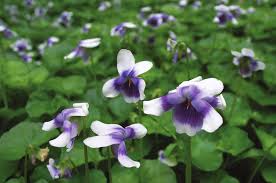 Located in Ballarat, Woowookarung Regional Park is a new 641-hectare regional park created in 2016 through the ongoing efforts of the local community and its many user groups. ‘Woowookarung means place of plenty in Wadawurung language,’ Georgina says. ‘Walking through the meandering tracks and trails of the Woowookarung, you will find a plethora of wildflowers, including many pea species, such as masses of Golden Bush-pea or the beautiful Herdenbergia sprawling over fallen logs. And don’t forget to watch out for the dainty native Violet or Ivy-leaf Violet that are very small and grow low to the ground.’ 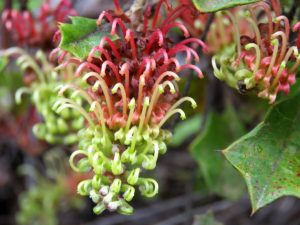 Lying on the outskirts of Ballarat, the Enfield State Park boasts a similar landscape and wildflower variety as Woowookarung. ‘Here you’ll find many of the same species due to the bushland once being part of a much larger area of forest prior to European settlement,’ Georgina says. ‘However, Enfield State Park has many of its own curiosities, with endemic species such as the Enfield Grevillea.’ 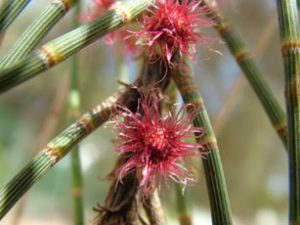 Along the Otway Plain around Winchelsea and Wurdale, the Buckley casuarina woodland is home to quite a large remnant of drooping Sheoak. Usually growing in poor, dry soils, the species is wind pollinated and dioecious (male and female flowers on separate trees). ‘The female flowers are very inconspicuous,’ Georgina says. ‘But if you look closely you can see the cutest fuzzy flowers.’ 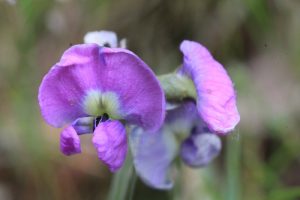 Renowned for its wildflowers, Kyneton’s Bald Hill Reserve is home to many precious peas including remnants of the nationally threatened Clover Glycine. The reserve is also home to other wildflowers including the Yellow Rush Lily and Sticky Everlasting. 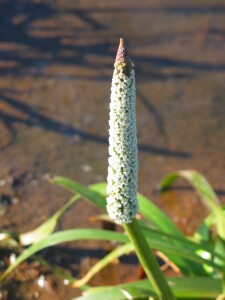 Wetlands are the best place to spot aquatic species such as Water Ribbons, which are mostly discovered in permanent swamps, lagoons and streams.  They feature an erect spike up to 30cm long and boast cream to pink flowers. Normally a plant of freshwater environments, some Water Ribbons have a huge tolerance to the saline and acid waters in East Gippsland.  Spectacular displays of orchids, wattle and heathland can also be discovered within this extensive coastal park. 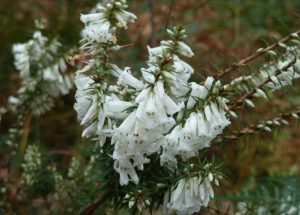 The Grampians region is home to a huge variety of emerging wildflowers including pink and white heath, orchids and blooming tea-trees in their natural settings. Wander around the vast bushlands of the region and catch a glimpse of the eye-catching flora, or visit in early October for Halls Gap’s Wildflower Walkabout Weekend. 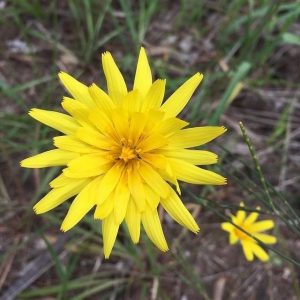 If you’re seeking an overdose of wildflower species, Slatey Creek near Creswick will surely indulge your appetite. Native peas, Goodenia, Drosera and Golden Spray are just a few of the species that can be found here. The area is also home to the Murnong Yam Daisy, a widespread wildflower in Victoria that can be found in dry, open forests everywhere. With a tufted rosette of toothed lanceolate leaves, it is reminiscent of a dandelion due to its yellow head of florets, and its tuberous roots are also edible! 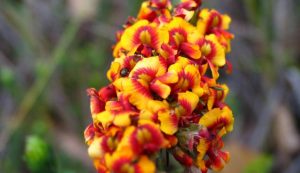 If you’re seeking a wildflower appreciation venture in a coastal setting, the towns along the Great Ocean Road will surely satisfy. Admire banksias, parrot peas and orchids along the Surf Coast Walk, which also crosses the Anglesea heathlands, or traverse more heathland in the Bay of Islands Coastal Park where spring wildflowers abound at the Tower Hill Wildlife Reserve.

A note on Gorse: 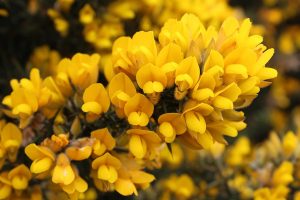 According to Georgina, the dense shrub known as Gorse is particularly deceitful. With large yellow pea flowers, it is in fact a problem weed. ‘This little devil is extremely hard to remove, with seed that can last dormant in the ground for approximately 70 years,’ she says. ‘If the ground is disturbed within that time, hundreds of gorse can sprout and take over vast areas, out-competing native species and wildflowers.’ Thankfully, Georgina says there are certain task forces that have been tasked with eliminating this weed – heavy gear and machinery in-tow.

According to Georgina,  it is important to show utmost respect to your surroundings during your wildflower wanderings in order to ensure the preservation of these native plants as well as the surrounding flora and fauna.

‘Remember to look up the guidelines to the parks areas that you visit,’ Georgina says. ‘It’s always best to leave natural areas with less rubbish than when you arrived, so please don’t litter! Traveling to regional areas can be dangerous for not just people but for wildlife as well.’