Ten years ago, on a stormy night in an old wooden barn near Daylesford, a group of food-loving friends gathered to flout the law. Around a heavy redgum table they drank homemade grappa, ate wild-shot birds and very old dry–aged beef. They called it the “Illegal Dinner”. Then out came the cheese. It was a large round of creamy-coloured goats cheese with a wrinkly rind and ivory white interior. It was made especially for the dinner by Carla Meurs and Ann-Marie Monda from Holy Goat, a farmhouse goats milk dairy in central Victoria. Complex and nuanced, aromatic and intriguing, the cheese was nothing short of spectacular. But it was a one-off. An experiment. If they had sold the cheese they could have faced massive fines. It was a raw-milk cheese.

Since the 1960s all milk sold in Australia for human consumption, by law, needs to be pastuerised. It is also illegal, with some small exceptions, to sell cheese made with milk that has not been pasteurised. Unpastuerised milk is called raw milk. Apart from water, protein, fat and lactose, it contains enzymes to help the calf digest the milk. It also contains incidental bacteria: some beneficial, some benign, and the possibility of some that are harmful such as listeria, salmonella and E. coli. Those bugs are not destroyed during cheesemaking. Lydia Buchtmann, spokesperson for the Food Safety Information Council, revealed in an interview with News Ltd, ‘We have quite a strong view that pasteurisation has done a great deal of good … all it does is heat-treat milk for a short period to kill bacteria,’ she said. ‘It’s likely that milk will be contaminated no matter how clean you try and keep it. You milk a cow from the same end it poops.’

‘There are lots of beneficial bacteria that help make beautiful cheese in raw milk,’ says Richard Thomas, known as the godfather of the Australian cheese industry. ‘There are thousands of tonnes of raw-milk cheese made, safely, across the world, every year,’ he says. He refers to cheeses like the complex and aromatic washed-rind Epoisses and the stinky, meaty Reblochon cheeses made from raw milk since the middle ages. ‘The biggest problem with cheese in Australia happened with a cheese made from pasteurised milk, not raw milk!’ he says emphatically. Thomas refers to the 2013 Listeria outbreak linked to Jindi Cheese, in which three people died and scores of others were made ill after eating cheese from this manufacturer.

In 1998 Food Safety Australia and New Zealand tried to ban the import of all raw-milk cheeses. Exemptions were made for cooked-curd cheeses such as Gruyère and Emmental, and hard cheese such as Parmigiano Reggiano. The raw-milk cheese debate simmered over when authorities ordered the destruction of a shipment of famous cave-ripened Roquefort, imported by cheese luminary Will Studd. The cheese was ordered to be buried – so Studd organised a mock funeral in which the cheese was carried by hearse to the dump yard, a French flag draped over the hearse. He was labelled a ‘food terrorist’ by a food industry magazine. Later, imports of Roquefort were allowed in 2005.

Between 2009 and 2012 changes to the Food Safety Act did allow Australian cheesemakers to make hard cooked-curd cheese. This means that raw milk is used to make the curds that are then cooked, pressed and aged to make hard cheeses. In Tasmania Nick Haddow created the sweet, nutty and very savoury C2 raw cows–milk cheese. South Australian cheesemakers followed, with Hindmarsh Valley Dairy and Woodside Cheese Wrights making exceptional goats milk cheeses. Despite the initial softening of the food authorities’ attitude, there were no raw-milk washed rind cheeses, white-mould cheeses such as those made in the brie style, or blue cheeses made in the style of the imported raw-milk Roquefort, allowed to be made. 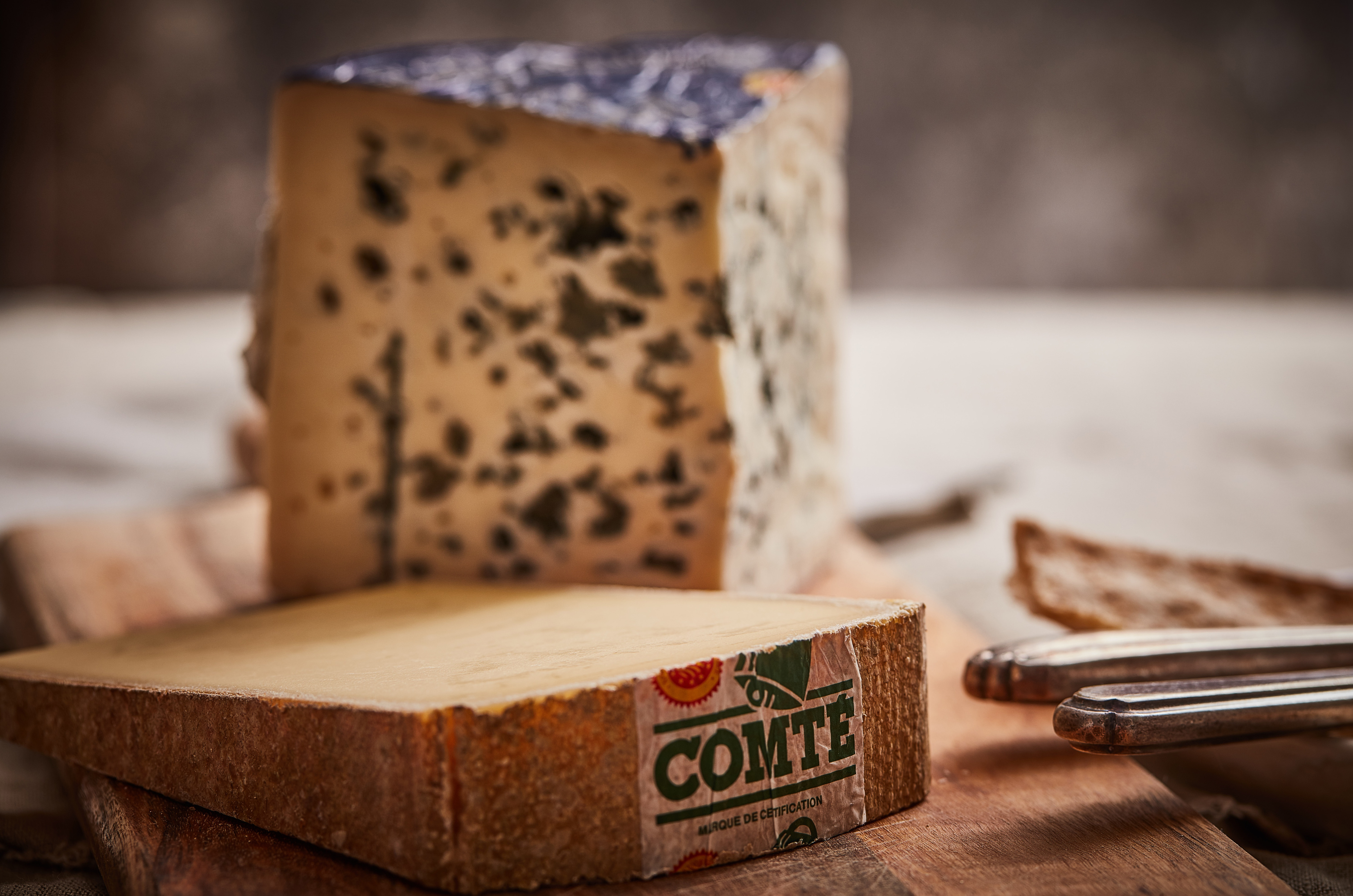 At this time, a new breed of artisan cheesemakers arose and they helped the Australian Specialty Cheesemakers Association (ASCA) steer a course to allow greater and more varied production of raw-milk cheeses to occur. ASCA, along with many cheese lovers, lobbied government and in 2014 a new standard was released. It allowed semi-hard cheeses, such as cheddars, alpine semi-hard styles and some blues to be made. Soft, moist raw-milk cheeses – think brie and taleggio styles – are still illegal to make and sell. Three years ago this new standard seemed like a ray of hope for raw-milk cheese pundits, with some predicting a new golden era of Australian cheesemaking.

But it was not to be. The new standard is very complicated and very difficult for cheesemakers to implement. ‘Burke and I would love to make raw-milk cheese,’ says Bronwyn Brandon of Prom Country Cheese. She and her husband Burke have a small sheep-cheese dairy and farmgate in Gippsland, near Korumburra. ‘But the cost of compliance with animal health testing and cheese testing would put the price of a raw-milk cheese beyond the reach of our customers,’ she says. Their award-winning pasteurised Venus Bay Blue, a dense, sweet and slightly piquant blue cheese, sells at $80 per kilogram. A raw-milk cows blue made by South Australian cheesemakers Udder Delights sells for $150 per 500g wheel, packed in a special wooden case. It took them 30 months working with authorities to be able to make the cheese.

To say the authorities do not want raw-milk cheese to be made in Australia would be wrong. There is a lot of goodwill. A special workflow tool to help cheesemakers make raw-milk cheese has been developed by Dairy Food Safety Australia with the University of Tasmania and is supported by ASCA, but has yet to be implemented.

Raw natural milk is not radioactive fuel. Both science and history supports its use for production of cheese

Some pundits have a more bleak outlook. ‘The situation in Australia on raw-milk cheese is bullshit,’ says Cheese Slices host and importer Will Studd. ‘It is driven by paranoia and politics. Raw natural milk is not radioactive fuel. Both science and history supports its use for production of cheese,’ he says, with obvious frustration. ‘Whilst our counterparts overseas enjoy wonderful, benchmark raw-milk cheeses, we are stuck with regulations that only allow just one real raw-milk cheese to be imported – Roquefort.’ He explains that because they are cooked-curd and aged for years, cheeses like Gruyere and Parmesan are considered by Australian bureaucrats not to be raw-milk cheeses.

‘This situation will only change when the politics change,’ predicts Studd. ‘That could be sooner than we think given EU negotiations on free trade that could see French raw-milk cheeses imported here, which would force change on domestic production of raw-milk cheeses.’

Out on their Sutton Grange farm in central Victoria, Carla Meurs and Ann-Marie Monda continue making goats cheese using gently pastuerised milk. Their La Luna rind-ripened cheese is considered by many to be the best in Australia. They, however, remain pessimistic about the future of the breadth of the domestic raw-milk cheese industry. ‘Remember that raw-milk cheese we made for the illegal dinner?’ says Carla Meurs. ‘The way things are going we will never be able to make and sell a cheese like that in Australia.’