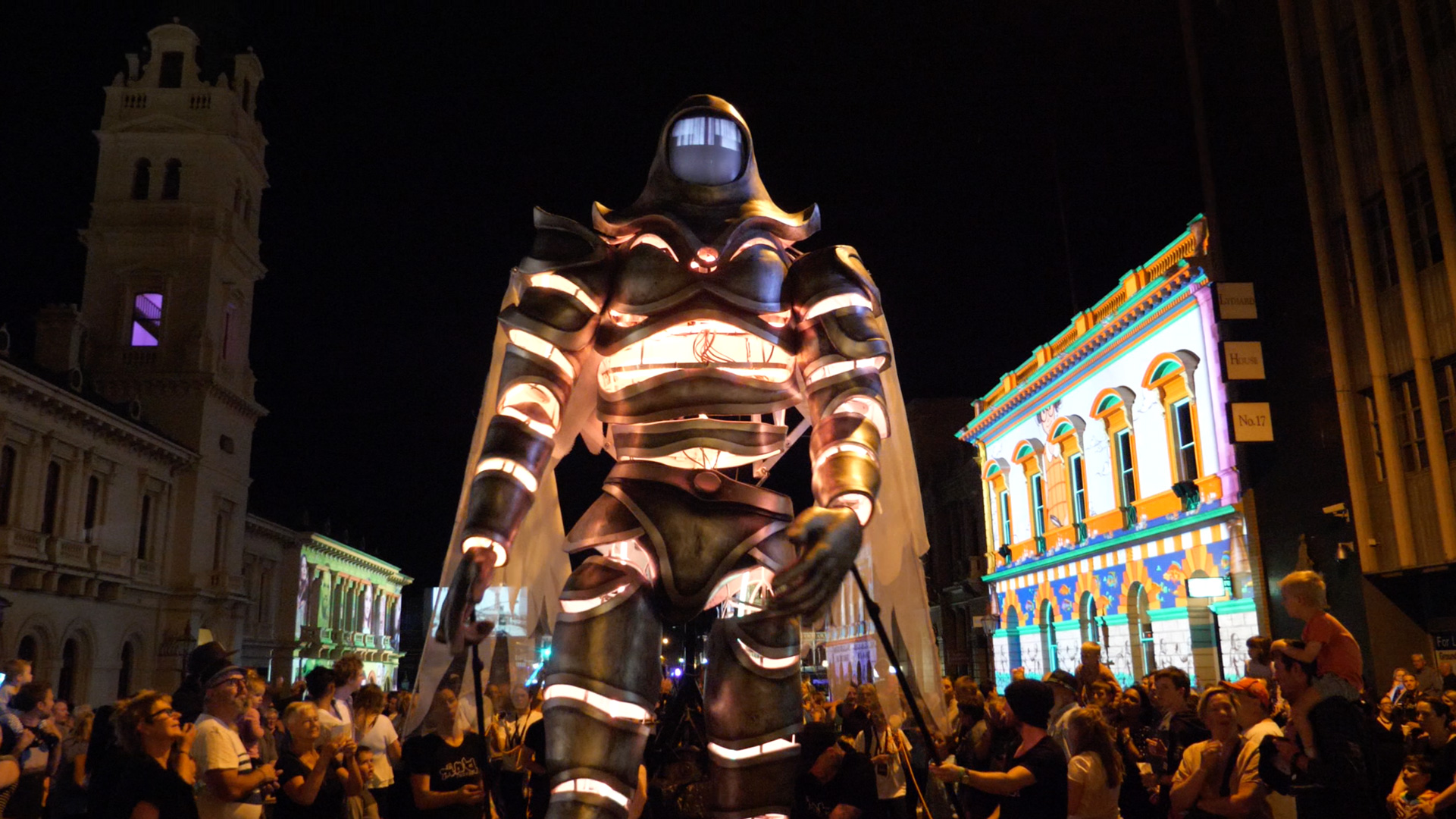 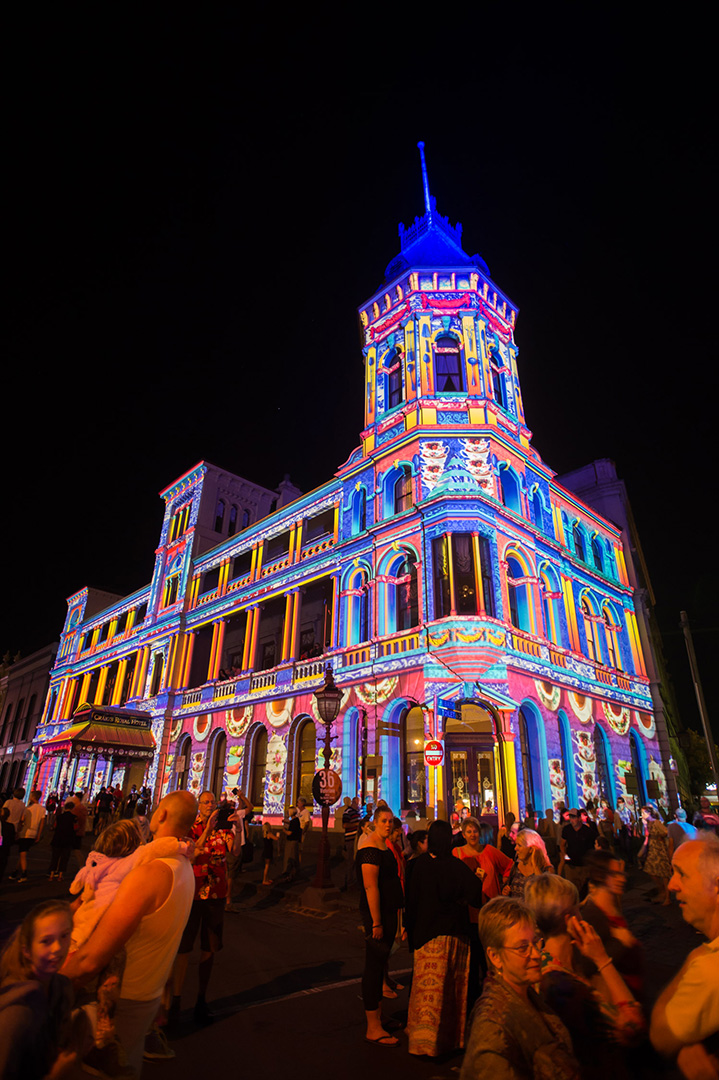 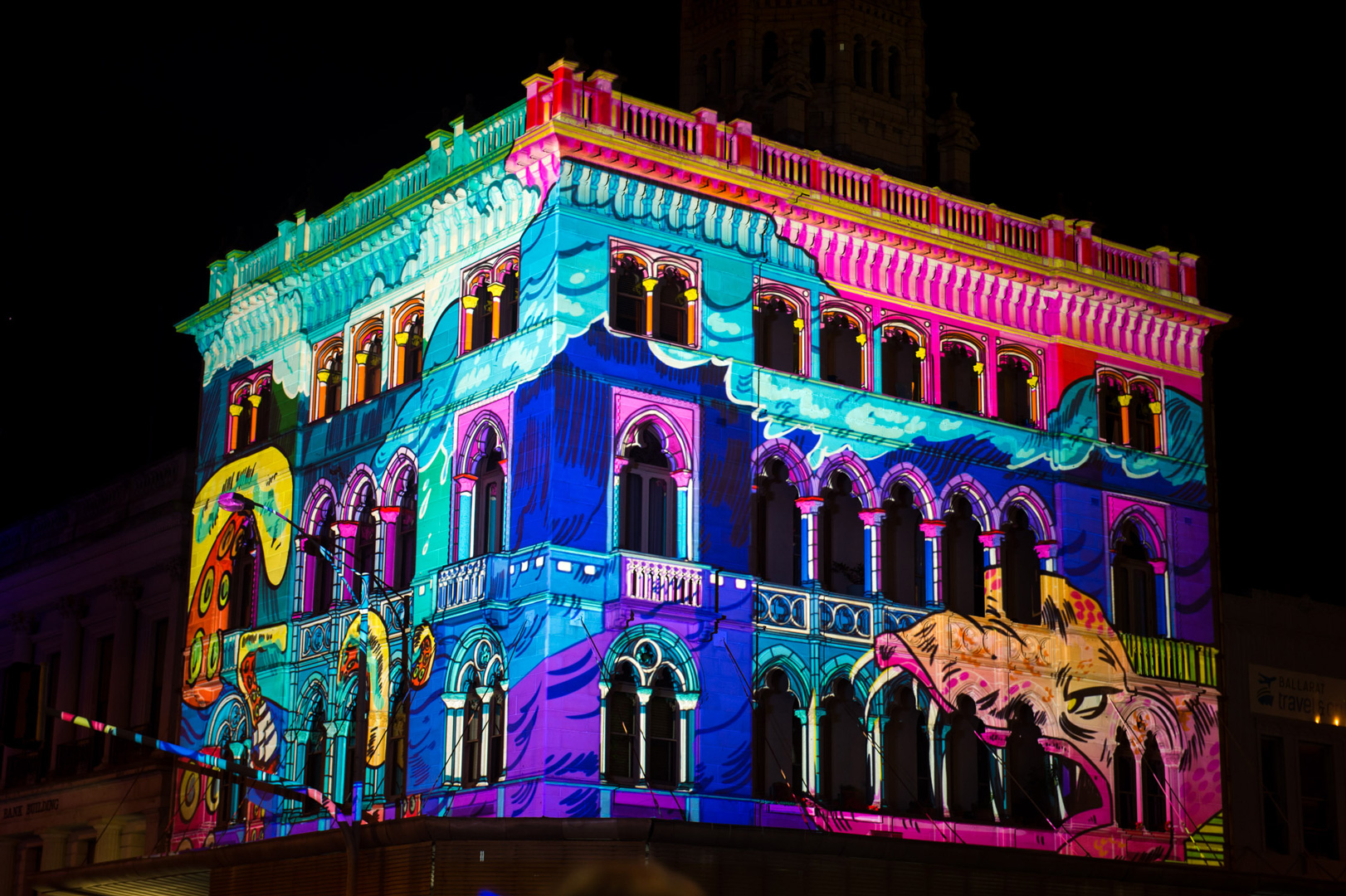 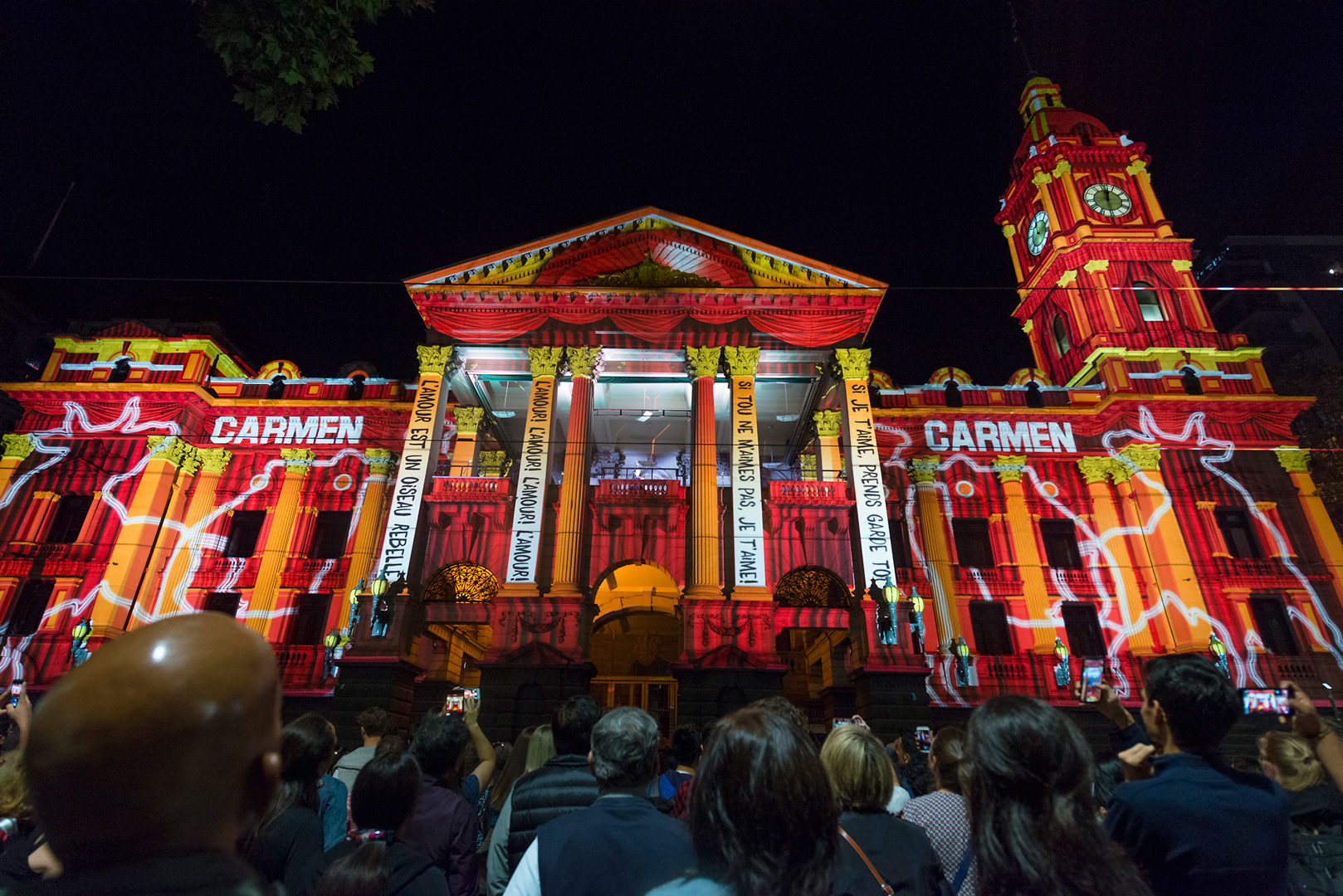 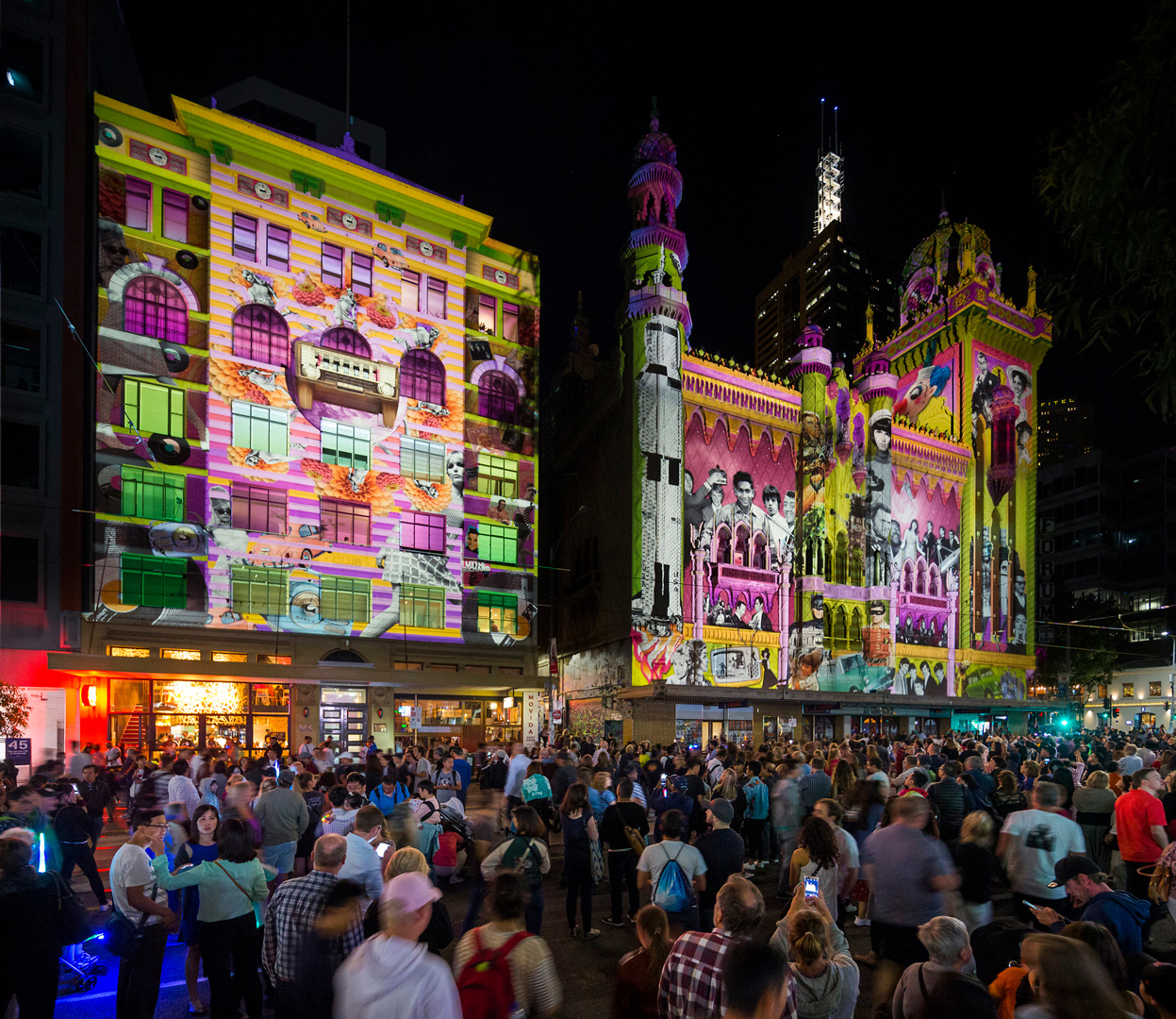 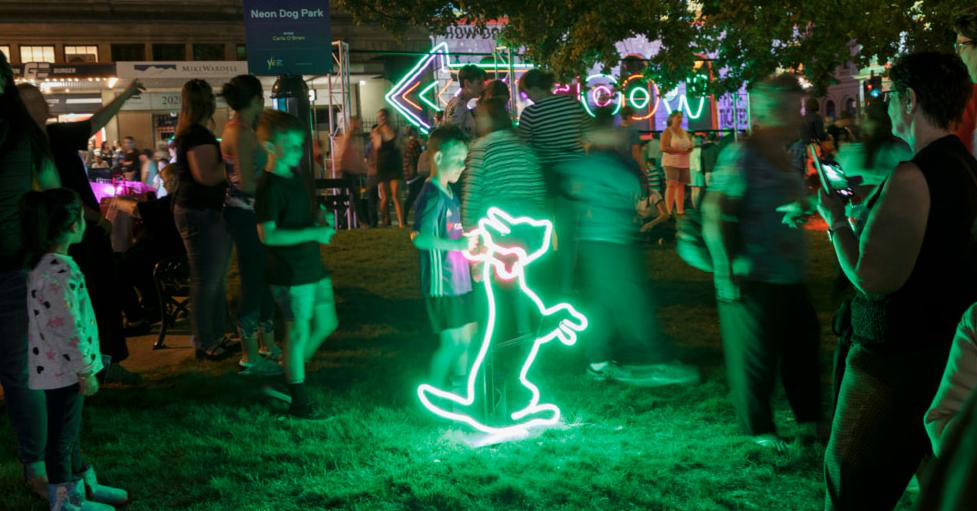 The stage is set for Bendigo’s inaugural White Night, where the arts and technology align to create a star-spangled, spectacular visual display. Here are the top five things we love about White Night Bendigo.

With over 50 projections, installations, performances, exhibitions and music events featured across three precincts, you will be hard-pressed to see everything in the seven hours that is White Night Bendigo. Don’t let that stop you from trying, though! This program map will help you find your way around.

‘Each regional White Night is different and a unique experience, and each is informed by both their individual locations, buildings’ architecture, and the local artists, performers and cultural institutions who participate,’ says White Night artistic director, David Atkins. If this name sounds familiar, that’s probably because Atkins is the man behind mega events like the Sydney 2000 Olympic Games opening and closing ceremonies.

Atkins says that a point of difference for White Night Bendigo is the opportunity to expand into the parkland, due to the close proximity of Rosalind Park. Here you will find Lantasia Lights, a series of sculptural lanterns of Australian flora and fauna (watch out for the giant spider), and the uplifting and awe-inspiring giant LED animation of creator spirit Bunjil the Eagle.

Rousing lines from Australian bush poets like Henry Lawson will be writ large upon the façade of the Colonial Mutual building, while the Australian Mutual building will sport a collage of archival images, artworks and news clippings from Bendigo, dating back to the late 1800s. Then there’s the unmissable guerrilla opera performance by BK Opera, who will perform live on the steps out the front of the Capital Theatre.

The White Night Messenger has been so popular at other White Nights that it’s coming to Bendigo too! Brought to life by eight puppeteers and performers (no mean feat, considering this 5m-high angel has a wingspan of 6m), this giant angel will roam the streets during White Night, spreading a message of peace and unity.

The positive vibe continues with a projection on the Old Bendigo Bank building that imagines a kinder future: What if we performed an act of love, goodwill or generosity at least once a day? Also look out for an enormous 15m x 9m painting of the female Buddha, Tara the Liberator, and the Sri Lankan Fellowship of Bendigo’s Illumination Meditation.

Get amongst the giant, glowing cocoons of Metamorphosis, beam out with an 8m-high inflatable spaceman, and climb into clouds for a sensory experience in Head in the Clouds. Or be like Katy Perry at Burning Man Festival and pose in front of Australian artist Carla O’Brien’s Neon Angel Wings.

There’s a selfie station, too: an interactive photo booth that projects the photos taken inside onto the exterior of a nearby building, where you will be able to see yourself, quite literally larger than life! And even the double-sided, 10m-long, 2.5m-high LED-lit ‘White Night sign’ is a popular selfie landmark, with its opportunities for silhouettes and shadow play.

Two of Melbourne’s most popular drag queens, Miss Art Simone and Pashion Couture, will be White Night Bendigo’s very own Tram Queens for the night, shaking their groove things (and a lot of other things, possibly) on one of Bendigo’s iconic heritage trams. Just like Priscilla, Queen of the Desert – except the drag queens are on a tram, not a bus.

The party doesn’t stop there – there’s a Groove Tram dropping disco and dance tracks from the 1980s and ’90s, and plenty of live music throughout the night on the Bendigo Live main stage at the corner of View Street and Pall Mall – not to mention back-to-back blues all night on The Blues Balcony. Or maybe the Silent Disco Walking Tour at Bendigo Art Gallery will be more your style: don headphones and dance around the gallery spaces listening to hilarious commentary and uplifting dance tracks.

The good news? You don’t have to get to everything in just one night!

Other exhibitions you can explore before or after White Night include Bankrolling Bendigo, Follow the Thread, and the Ben Quilty and Michael Dagostino–curated Another Day in Paradise. It presents the significant output of work produced by Myuran Sukumaran while incarcerated in Bali in the lead-up to his execution, alongside newly commissioned works by leading Australian artists. Other local highlights you won’t want to miss are the Food Fossicker Tour and the Bendigo Blues Tram – perfect for those visiting Bendigo, because they take you on a tour of the town.

‘While White Night features some fantastic projection works, it is much more than a light show,’ says David Atkins. ‘It features performers who represent almost every music genre and performance discipline, actors, singers, dancers, graphic artists, painters and installation artists.

What: White Night Bendigo
Where: Bendigo city centre and Rosalind Park
When: 1 September, 7pm to 2am
Transport: Regular V/Line trains and buses from Melbourne;
Park and ride options within Bendigo
More information: https://whitenight.com.au/bendigo/