Five Fantastic Waterfalls that are Off the Beaten Track 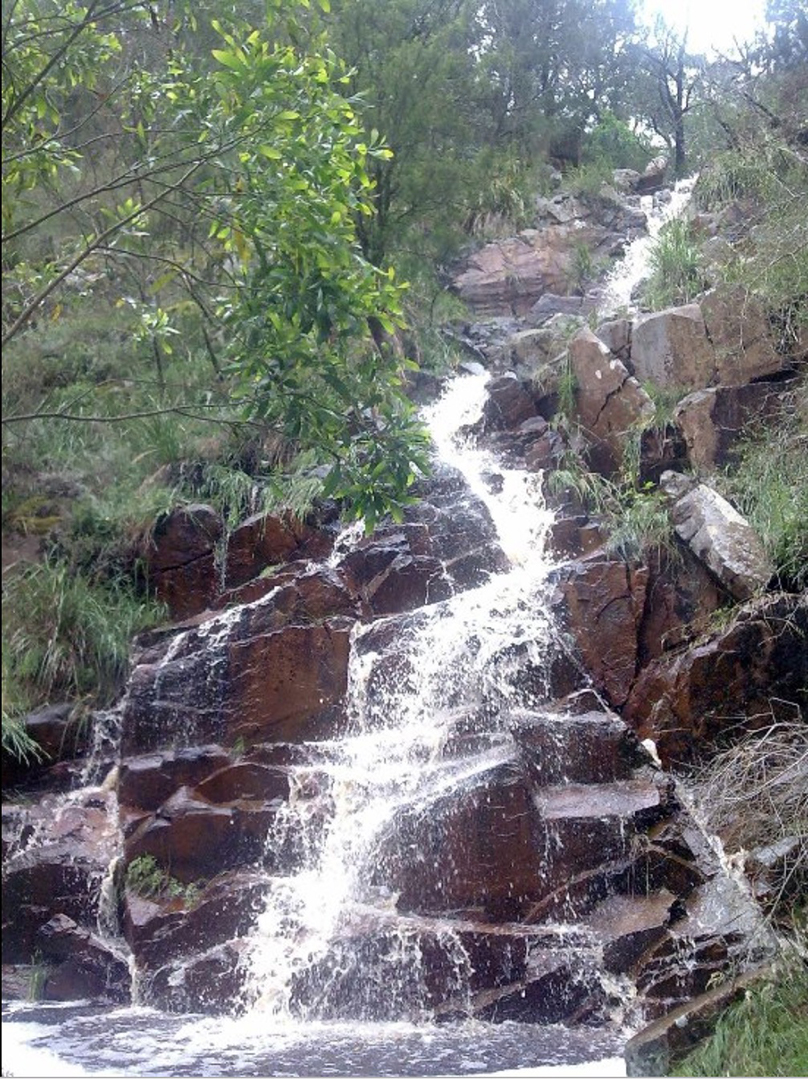 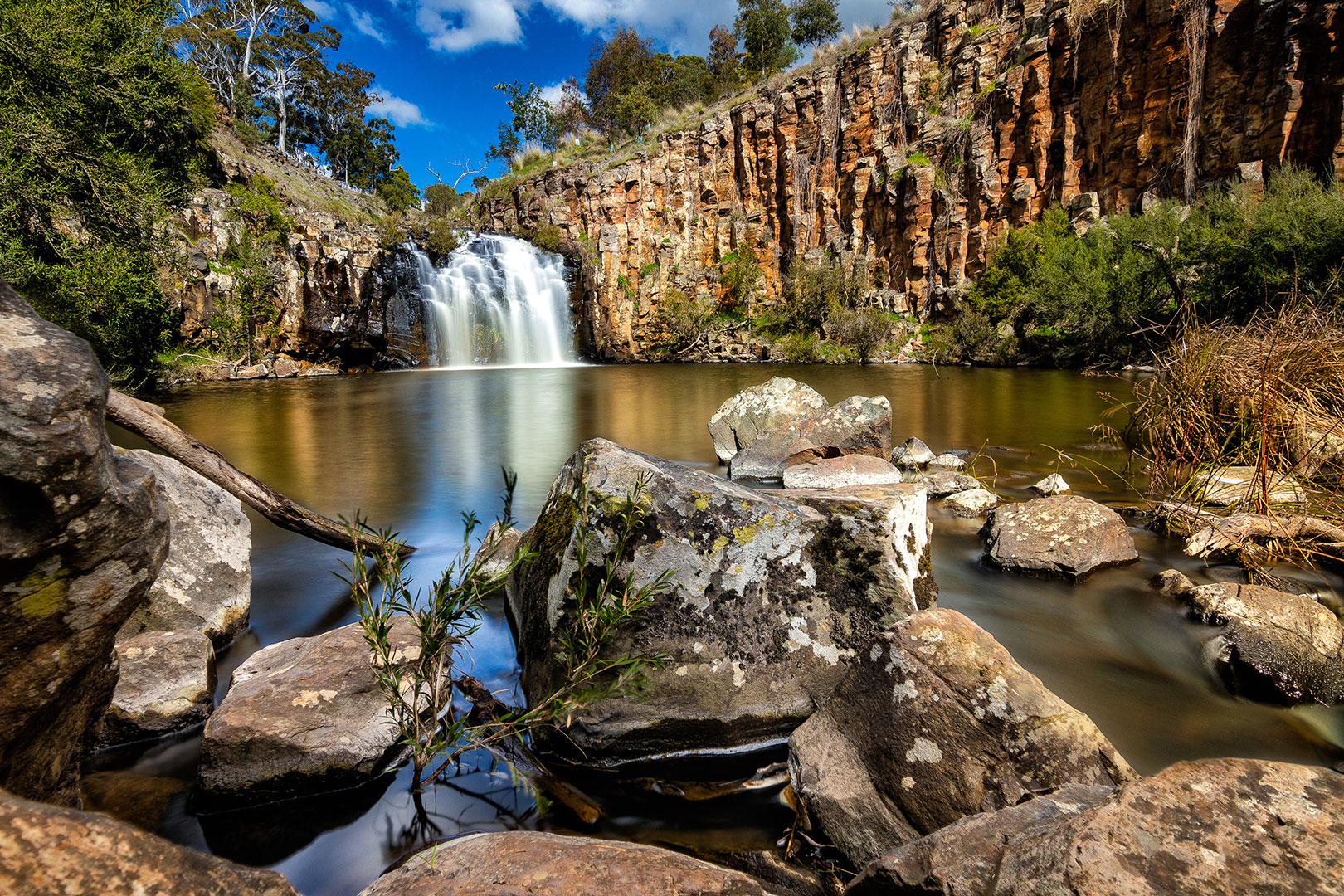 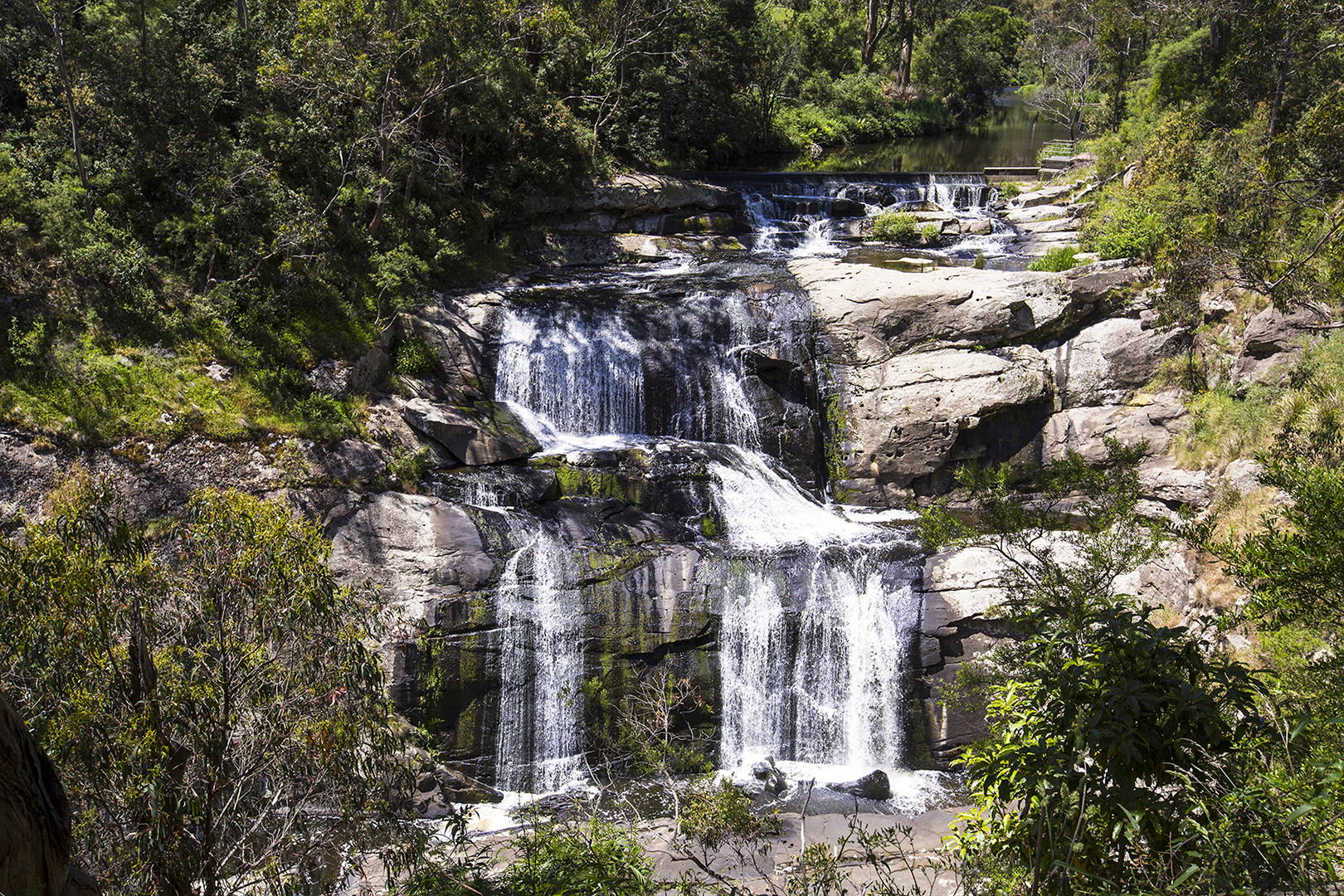 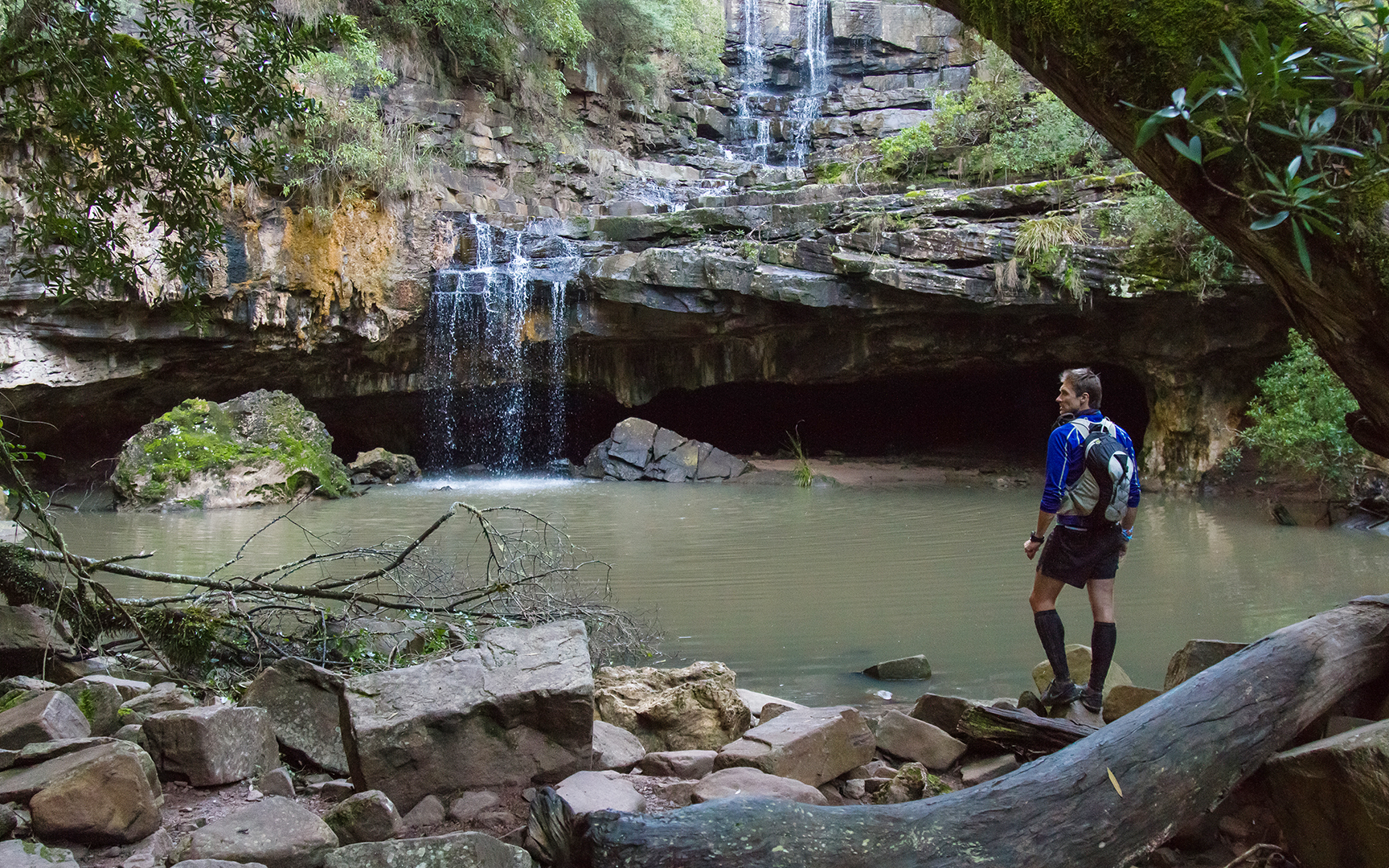 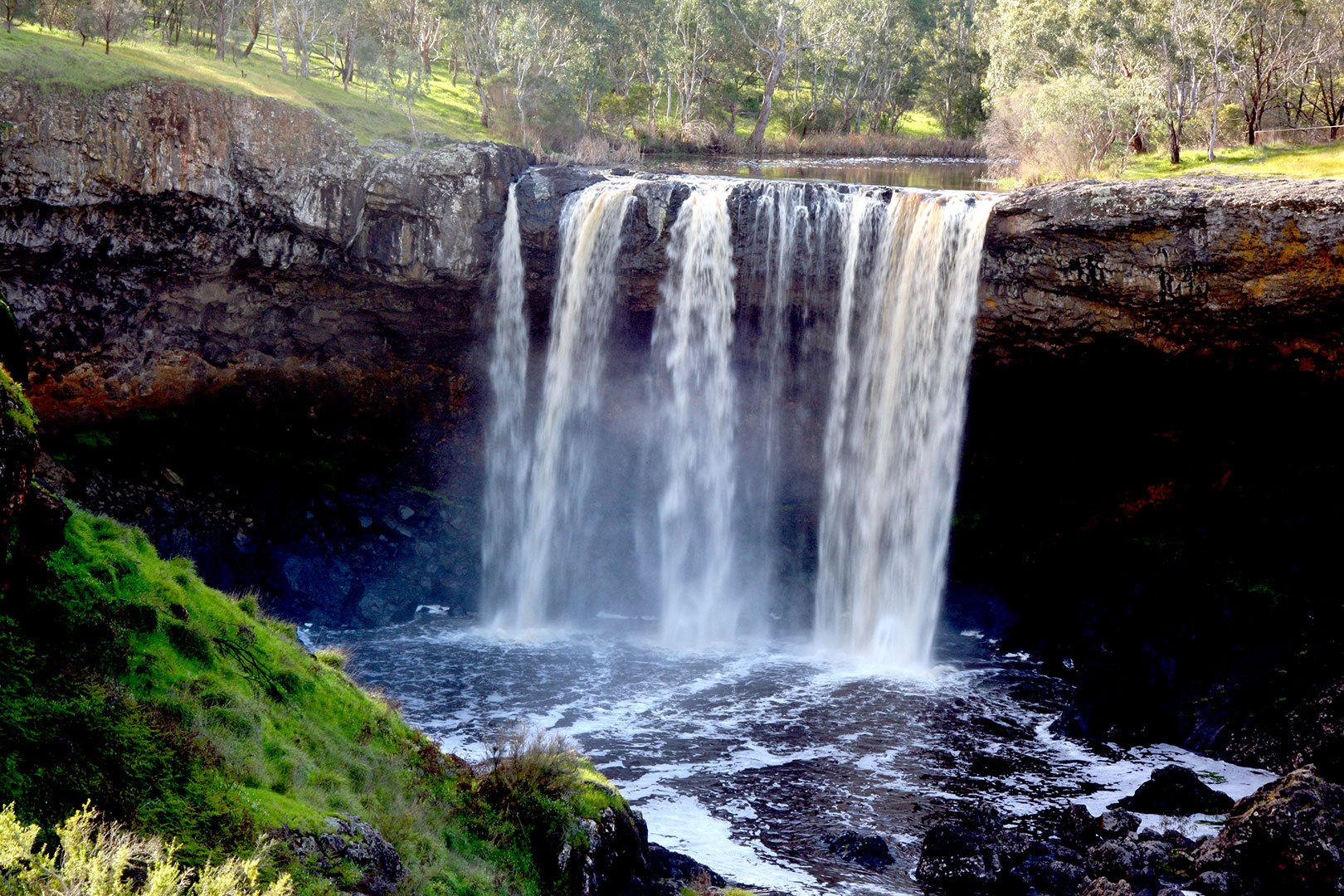 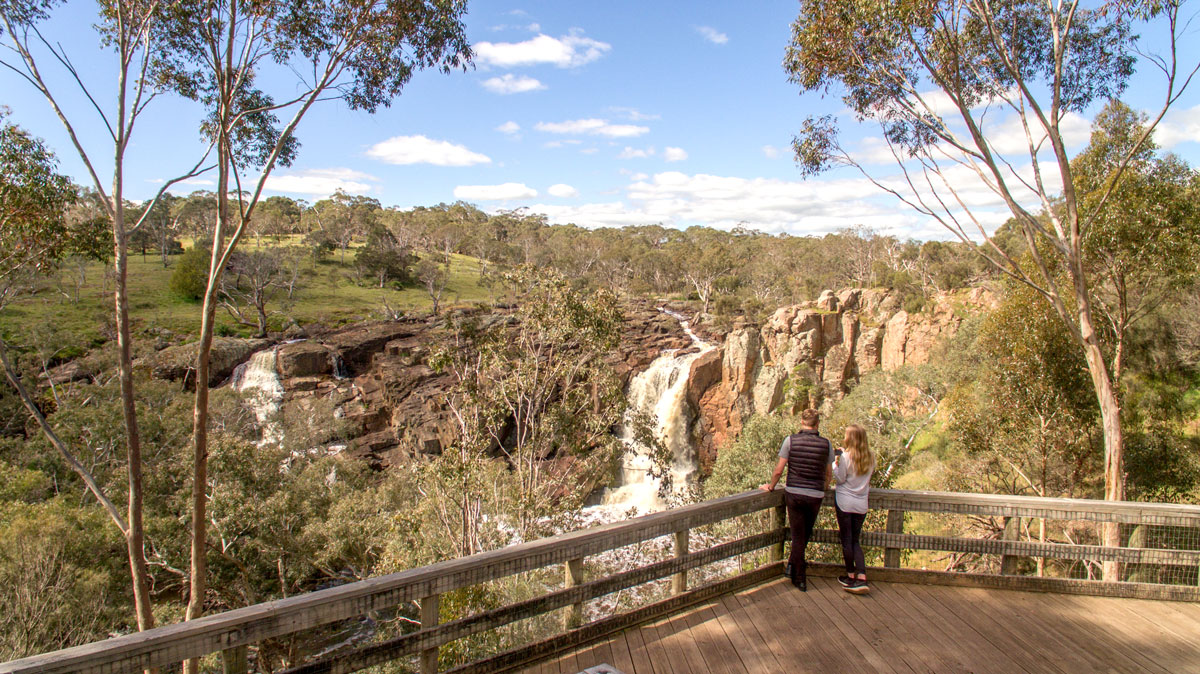 It’s the anticipation of the spectacle that I love most about waterfalls. It’s that hissing roar as tonnes of water hurtle out over a rocky ledge, to float seemingly slowly down through the air, only to thunder once more as it hits the rocks below. Sometimes, often in summer, the flow is reduced to a thin veil that showers down, the warm breeze picking up the spray, covering your face and arms with a cooling mist. A lot of Victoria’s waterfalls are known sacred sites to the indigenous people and sometimes there will be a sign asking visitors to act respectfully. Some are set up for tourists with concrete paths and lights at night. In this list, however, I have chosen some falls that might not be as popular or as dramatic as the glossy tourist brochure showstoppers, but they have a special feeling and offer something unique.

Crimson rosellas fly in broad arcs across the narrow gorge. Silver banksias and black wattles cloak the steep slopes. Spring rains see the summer trickle turn into a small torrent as water pours over dark boulders tumbling down into this small, tight and almost secret valley hidden in a crease of Arthurs Seat. This is Kings Falls, a small but quite dramatic waterfall that offers a rare glimpse into what this part of the Mornington Peninsula would have looked like when home only to the Boonwurrung. They named the 330m-high peak nearby Wonga, but Edinburgh-born Lieutenant John Murray renamed it Arthurs Seat after the volcanic outcrop in his hometown in 1802. The beauty of this waterfall is the solitude it offers to walkers, so close to Melbourne. It has easy access to parking just under 1km away and links to a network of tracks starting in the manicured gardens of Seawinds nearby. Consider lunch at Heronswood, an 1864 homestead in magnificent grounds and home to Diggers Seeds, which offers a true seasonal menu.

Details:
115 Waterfall Gully Road, Arthurs Seat
While you are in the area

A selection of sweet & savoury goods from some of Victoria’s finest producers.

Back in the 1800s these falls, a short horse ride from Daylesford, were a popular picnic spot. On the banks of a broad pond under the shade of candlebark trees locals and visitors would dip their toes into the cool clear waters of the Loddon River downstream of the 20m-high cascade of water gushing over hexagonal columns of 2.5-million-year-old basalt. Access can be difficult and the walk down the gorge is for the more adventurous and sure-footed walker. Look out for reptiles, swamp wallabies, the local eastern grey kangaroos and the resident wedge-tailed eagles that soar on the summer thermal currents. The Glenlyon General Store is only 1km away and offers outdoor casual dining, good burgers and has an excellent gin list.

Details:
Selwyn Rd, Glenlyon
While you are in the area

Out on Victoria’s perennially green coast near Toora, on South Gippsland’s Prom Coast, the Agnes River falls 59m over a cascade of boulders, creating a roaring spectacle, particularly after heavy rain. The river is surrounded by a ribbon of remnant bush, where fantails dart and play, flying up to catch termites on the wing. Meanwhile, kookaburras sit in the towering blue gums, watching for prey. This is a beautiful place and equipped with picnic area and toilets near the car park. The falls are a short 200m walk. Nearby is the historic town of Toora with a pub and cafe that serves excellent strudel, and access to the Great Southern Rail Trail.

Details:
125 Agnes Falls Rd, Hazel Park
While you are in the area

The Mitchell River National Park contains some of Victoria’s most beautiful and intriguing landscapes. At the Den of Nargun the Mitchell River cuts a deep gorge through the hard rock, creating dramatic escarpments. Down by the confluence of Woolshed Creek and the Mitchell River there is a clear pool of water surrounded by callistemon trees, some with massive gnarled trunks, that must be hundreds of years old. Upstream is the eerily beautiful Den of Nargun, a site sacred to the Gunai/Kurnai Aboriginal women, where the Woolshed Creek has created a waterfall, cave and rock pool. The walk is 5km return and quite steep in places, but the scenery is dramatically beautiful. Nearby in the town of Lindenow has a good Irish pub and the Long Paddock, a cafe in an old bakery offering classic country meals cooked by Michelin-star chefs. Great corned beef and excellent tarts.

Details:
Wallers Rd off Bairnsdale-Dargo Rd
While you are in the area

The Wannon River rises in the Grampians, flows through Dunkeld, northwest to Cavendish then west to the Glenelg. This is redgum country. Beautiful, rich grazing country, with the spectacular ancient Grampians/Gariwerd to the north and the dormant cones of volcanoes to the south. Just south of Cavendish the Wannon drops a dramatic 30m over a half-moon shelf of volcanic rock into a broad pool of water. There is more flow in winter; in summer the flow can reduce to a thin sheet but Tunda beean, as the falls are known to the Gunditjmara people, is still a magnificent and magnetic site that has a powerful sense of place. This beauty was captured by colonial artist Thomas Clark, whose 1860s paintings of the falls, both from a distance and inside the falls themselves, are prized possessions of the National Gallery of Victoria. A short drive away is Nigretta Falls. Book into the Bunyip Pub, Cavendish, for western-district classic cuisine with a modern bent cooked by former Movida chef James Campbell (17-25 Scott Street, Cavendish, 03 5574 2205).

Links:
Wannon Falls State Reserve, Camerons Rd, Wannon
While you are in the area.